Sava Marinkovic, suspected of murdering Sarajevo police officers Adis Sehovic and Davor Vujinovic in 2018 at Alipasino Polje in Sarajevo, was extradited to Bosnia and Herzegovina and transferred to the Correctional Institution in Sarajevo, because, according to the warrant, he had already been ordered to one month’s custody, it was confirmed for BHRT.

Marinkovic was taken yesterday by members of the BiH Border Police in Germany, where he was serving his sentence.

The Ministry of Justice and Interpol BiH were informed about the extradition and completion of the extradition. SIPA members took him over at the airport. He is currently under the jurisdiction of the Cantonal Court and it is not yet known when he will be examined by the Sarajevo Canton Prosecutor’s Office, which is handling this case.

While we hear stories about good criminals, the families of the killed police officers are still waiting for justice, and the state, even in this case, seems powerless soindividuals ridicule it by walking into the prosecutor’s office even though they are on the Interpol red notice. 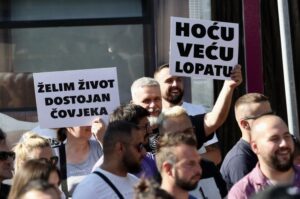 While the Party Leaders are negotiating with Schmidt, new Protests began
Next Article