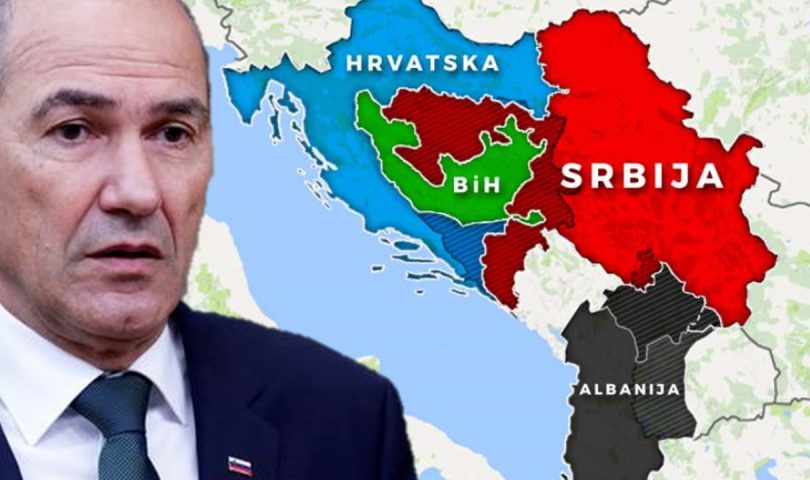 The Slovenian portal Uncensored published a “non-paper”, ie an unofficial diplomatic document that talks about the ideas for the dissolution of Bosnia and Herzegovina (BiH), the accession of the Republika Srpska (RS) to Serbia, and the unification of Kosovo with Albania.

As of Monday, there has been speculation in Slovenia, Croatia, and BiH about whether Prime Minister Janez Jansa has indeed sent an unofficial diplomatic document (non-paper) to Brussels, on redrawing of borders in the former Yugoslavia.

No one has officially confirmed that the President of the European Council, Charles Michel, received a document of such content from Slovenia. However, an unofficial diplomatic document that predicts the separation of BiH, the accession of RS to Serbia, and the unification of Kosovo with Albania actually exists, according to Uncensored.

As they stated, a document entitled “Western Balkans – the way forward” was received in Charles Michel’s office back in February.

Who is its’ author cannot be officially known. According to sources of the Slovenian journalists, it is certainly not created in the Slovenian Ministry of Foreign Affairs.

Some of its contents could have been written, according to some information, in Budapest. Nevertheless, in Brussels diplomatic circles, it is referred to as a “Slovenian” document, since Jansa’s cabinet allegedly participated in sending it to different addresses.

As it is an unofficial diplomatic document intended to communicate various views and initiatives without an official character, it has neither a head nor a signature. He came to Charles Michel by official diplomatic mail, so its existence can be publicly denied at any time.

Thus, this is not the official position of Slovenia, but only one of the informal proposals for a possible solution to the issue concerning the countries of the former Yugoslavia. But its content is in complete contradiction with all valid documents on which the foreign policy of Slovenia is based. The document is adapted to Serbian and Croatian nationalist circles, which have been working for three decades to separate BiH.

Black and white: How to separate BiH

The document thus mentions in the introduction the “unresolved national issues of Serbs, Albanians, and Croats” that emerged after the break-up of Yugoslavia. The authors of the document emphasize that even after achieving peace after the wars ended, the promised European perspectives and the progress of North Macedonia and Montenegro in this direction in the region, “key issues remain unresolved”. They are listed below:

that the Dayton Agreement from 1995, which ended the war in BiH, in which more than 100.000 lives were taken, practically recognized what had been achieved in the war, but not in principle.

that it is currently difficult to imagine the European perspectives of Serbia and Kosovo.

that membership of BiH in the European Union (EU) can be completely excluded.

that in the meantime the empty space was used by Turkey, which increased its influence in BiH and North Macedonia.

that besides Turkey, some local politicians and their supporters, who personally benefit from the chaos and dysfunctional institutions, no one is satisfied with the situation in BiH.

the proposed “solutions” to the problems described above represent a key part of the ”non-paper”.

The authors of this document stressed that Serbia, Croatia, and Albania currently have stable governments and that their elected politicians are capable of making strategic decisions.

What do they suggest?

Unification of Kosovo and Albania. “In Kosovo, 95 percent of the population wants to unite with the original Albanian nation. The situation is similar in Albania. The border between Albania (a NATO member) and Kosovo is practically non-existent. The Serbian part of Kosovo would receive a special status – based on South Tyrol,” as stated in the document. It is an autonomous province in northern Italy, where the majority of the population speaks German.

Annexing of most of the territory of RS with Serbia. “The Serbian national question could be largely resolved by annexing part of the RS to Serbia. In this case, Serbia is ready to agree to the unification of Kosovo and Albania,” as noted in the mentioned document.

“The Croatian national question should be resolved by merging most of the Croatian cantons in BiH with Croatia or by giving a special status to the Croatian part of BiH (according to the model of South Tyrol).”

“This would give Bosniaks an independently functioning state and they would take full responsibility for it. In a referendum, citizens would decide whether to join the EU or a future outside the EU (following Turkey’s example.) For now, the vast majority of Bosniaks support the EU perspective, but with the rising influence of Turkey and radical Islam, the situation could be worsened drastically in the next decade”, Klix.ba writes.