The jump in fuel prices in Bosnia and Herzegovina has worried many citizens. As of today, fuel prices in the Federation of BiH are higher by 5 to 10 pfennigs per liter, and a liter costs up to 3.60 BAM.

According to the data from the application of the Federal Ministry of Trade, a liter of diesel in Sarajevo costs from 3.41 to 3.76 BAM per liter, and gasoline from 3.31 to 3.56 BAM per liter.

Slow down the process

As economic analyst Admir Cavalic told the “Avaz” portal, the growth of prices cannot be stopped.

“However, it can be slowed down. We are monitoring the situation in neighboring Croatia. This is exactly what they are trying to do through a series of measures. What can be done when we talk about BiH is to reduce the state’s share in the total price of oil and oil derivatives on our market. That is the only realistic measure and it is the only measure that is now acceptable and can be realized,” said Cavalic.

He added that, unfortunately, the experience of trying to temporarily abolish excise taxes shows that there is simply no political will, nor is it, as he says, a topic that is not on the agenda.

There is a “ceiling” price

“They have no interest in going in that direction at all. However, the only concrete things are related to the reduction of the state’s share in the price of oil. Now it is too late to deal with some other issues, such as the state of competition in the market of oil and oil derivatives, understanding that we have the main decision,” he points out.

When asked about the statement of the Croatian expert Igor Dekanic, who stated that the amount of fuel could reach up to 12 BAM per liter, he said that he would not go that far.

“Be careful, there is a certain “ceiling” price that can go to certain oil and petroleum products. When we talk about consumption or demand for the above, why is it so … After one point, demand simply decreases.

It is an inelastic good, it is clear in the sense that consumers find it very difficult to decide to look for a substitute, but after a certain price, such as if it happens, after 10 BAM or even 5 BAM, the meaning of a given energy source is lost and simply switched to something else,” said Admir Cavalic for the “Avaz” portal. 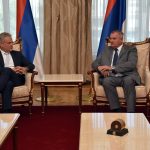