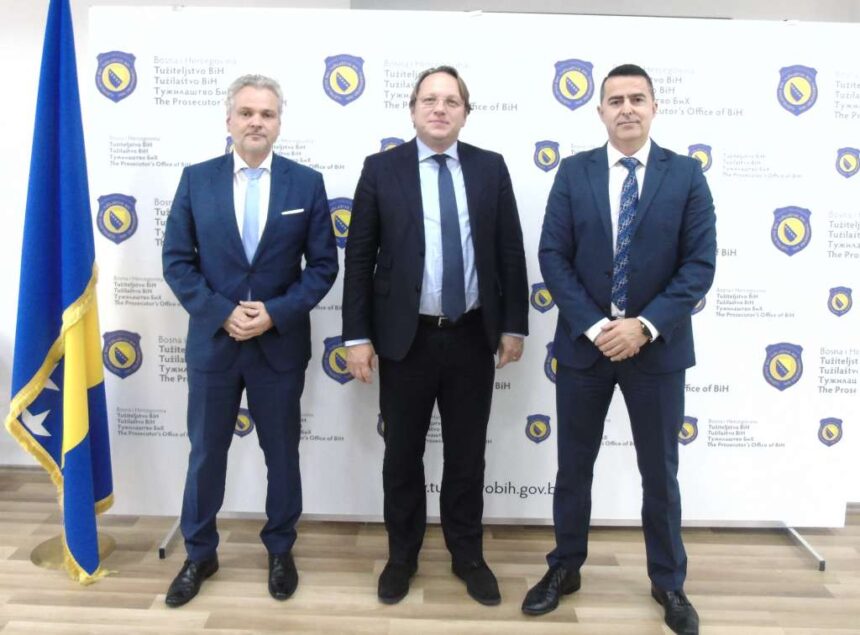 Chief Prosecutor Milanko Kajganić with prosecutors and associates met today with European Commissioner for Neighborhood and Enlargement Oliver Varhelyi, Head of the EU Delegation and EU Special Representative in Bosnia and Herzegovina, Ambassador Johann Sattler and their associates at the premises of BiH Prosecutor’s Office.

Given that the competence of the EU Commissioner is, among other things, focused on reform processes and strengthening the rule of law in the countries of the Western Balkan region, the officials discussed the activities of the BiH Prosecutor’s Office in strengthening the rule of law and security on the European path of Bosnia and Herzegovina, announced the BiH Prosecutor’s Office.

At the meeting, Chief Prosecutor Kajganić emphasized the importance of connecting law enforcement institutions and agencies from Bosnia and Herzegovina with partner institutions from EU countries, such as Europol, Eurojust, etc., as key instruments for a successful fight against crime.

Commissioner Varhelyi and Ambassador Sattler pointed out that the EU structures support the BiH Prosecutor’s Office and strengthen the capacity of this institution from the very beginning, building and equipping the capacity, as well as securing the equipment and resources necessary for the successful work of the law enforcement institution, as well as the rule of law and security of citizens, among the most important segments on BiH’s path towards European integration.