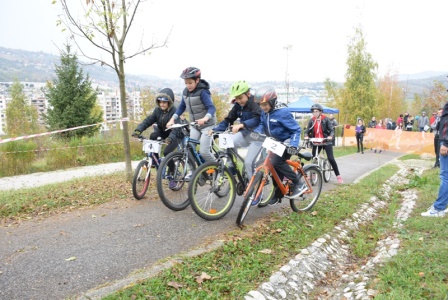 Second Bike Fest in Sarajevo gathered 40 children who showed their bicycle driving skills on Sunday. Children aged from 8 to 14 years old competed in two categories, showing their competing skills on the polygon and their speeding skills.

One of the organizers, Amar Njemcevic from the Mountain Bike Club “Puls” told Xinhua that in the first category, children showed their competing skills on the polygon that had 10 elements on which they needed to show their driving skills as well.

“Before the competition, children had the opportunity to train on the polygon and to improve their driving techniques,” Njemcevic explained, adding that the polygon was quite demanding, but that all the children at the end have shown that they have progressed very well.

The best in this category was Hamza Said Sahinovic who drove through 10 different elements without technical mistakes and in the fastest time.

“This race, which gathered 25 children, was driven for one hour in total. Younger children drove two circles and older ones drove three,” Njemcevic explained.

He stated his satisfaction that they managed to fulfill their plans despite the rain that was falling, sometimes heavily. Njemcevic pointed out that the race went without problems, fallings or injuries, which is very important since small children are competitors.

After the race, assistant to the mayor of Sarajevo Center municipality Jasmina Fazlic, said that Municipality Center as organizer, wanted to promote a healthy lifestyle through this race.

“In recent years, Municipality Center has improved the infrastructure for cycling, and we believe that these projects, besides the social impact, help to get people acquainted with the rules and aspects regarding safety in traffic and motivate citizens to be more engaged in the sport as healthy lifestyle” explained Fazlic.

The prizes were awarded for the three first-placed competitors in both categories and for the fastest one on the polygon.