Chairman of the Council of Ministers of BiH Dr. Denis Zvizdić met in Washington with Dr. Charles Kupchan, special assistant to the President of the USA for safety issues, Mark Tervakoski, Director of the National Council for Security for the Balkans region, and Matthew Palmer, Director of the Office for Southern and Central Europe, with whom he discussed the current economic and political situation in BiH.

Chairman Zvizdić informed the high officials of State Department about current economic and political situation in BiH, as well as about the progress that BiH achieved in the process of European integration and in terms of regional cooperation. He emphasized that the future of BiH is in the European Union and that this path has no alternative.

Zvizdić pointed out that the United States of America is one of the closest foreign policy partners of BiH and one of the main friends of BiH who supports BiH on its path of Euro-Atlantic integration.

High officials of State Department praised the progress that BiH achieved in the past period and highlighted that they fully support the further NATO path, the continuation of fulfillment of conditions on the path towards the EU, and for the strengthening of peace in the region.

The meetings also covered issues that are pertinent to overall stability, regional cooperation, the rule of law, fight against corruption and fight against all kinds of criminal.

Chairman Zvizdić expressed gratitude for the support that the USA is providing for Bosnia and Herzegovina in the process of strengthening of stability, democracy and progress in BiH and the Balkan region.

The meeting was also attended by the Ambassador of BiH to the USA Haris Hrle. 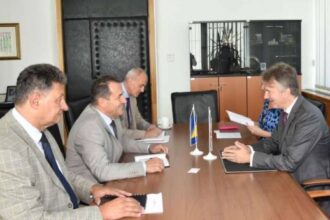