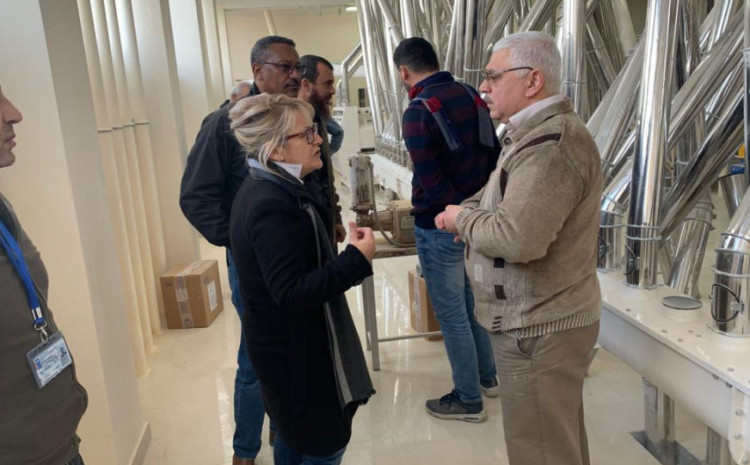 The Nobel Peace Prize was recently awarded to the World Food Program (WFP), the largest humanitarian organization in the world, which saves about 100 million children and adults worldwide from starvation every day. Ten humanitarians from Bosnia and Herzegovina are also part of the WFP team. Among them, Dragica Pajevic Alp from Banja Luka and Zlatan Milisic from Sarajevo stand out, Avaz writes.

These two exceptional people spoke for Srpskainfo about how they received the news of the great recognition and what motivates them to cruise from end to end of the world, helping the hungry and the unfortunate.

Fifty years old Dragica Pajevic Alp, a woman from Banja Luka, better known to her fellow citizens by her maiden name Milojevic, has been working in the World Food Program for 23 years.

After Iraq, Turkey, Sudan, Liberia, Kenya… today she serves in Cairo. When she goes home, she travels to Belgrade, because the Pajevic Alp family has recently been the home port in the capital of Serbia.

She was also in Belgrade when it was announced last Friday that the WFP had won the Nobel Peace Prize.

”It was a normal weekend morning, because in the region where I work now, weekends are on Fridays and Saturdays. I was drinking my morning tea and checking official emails, when “Braking News” – the Nobel Peace Prize to the World Food Program – popped up from my BBC app. It was a very emotional moment. I read the news at least three times, to be sure it was true,”  Dragica said.

She first shared the good news with her sons, to thank them once again for “suffering” her travels, day and night work, moving from one end of the world to the other.

Dragica currently works in Cairo as a coordinator and consultant for the WFP food aid delivery chain for the region of Eastern Europe, the Middle East, North Africa and Central Asia.

In 16 countries, they provide assistance to the population, and they cooperate with several other countries in the same region, where they buy food for the hungry.

”We do all that, of course, with the support of our donors, without whose help none of this would be possible,” says Dragica.

Her friend Zlatan Milisic from Sarajevo, has an even longer experience in the UN World Food Program. Zlatan is currently not engaged in the organization, because recently, by the decision of the UN Secretary General Antonio Guterres, he was appointed the head of the UN mission in Tanzania.

Still, he proudly points out that he is still part of the WFP team and will return to the World Food Program after his term expires.

”I think that the WFP was quite deservedly awarded the Nobel Peace Prize. This recognition confirms the important link between armed conflict and famine and suggests that food aid can be a stimulus for peace efforts. The Nobel recognition also puts emphasis on the importance of international organizations, ie multilateralism in solving world problems,” says Milisic.

He adds that humanitarian organizations such as the WFP, unfortunately, cannot bring peace to the world, but they can do much to help those affected by the war, as well as those trying to achieve peace.

The World Food Programme is the world’s largest humanitarian organisation addressing hunger and promoting food security. In 2019, the WFP provided assistance to close to 100 million people in 88 countries who are victims of acute food insecurity and hunger. In 2015, eradicating hunger was adopted as one of the UN’s Sustainable Development Goals. The WFP is the UN’s primary instrument for realising this goal. In recent years, the situation has taken a negative turn. In 2019, 135 million people suffered from acute hunger, the highest number in many years. Most of the increase was caused by war and armed conflict.

The coronavirus pandemic has contributed to a strong upsurge in the number of victims of hunger in the world. In countries such as Yemen, the Democratic Republic of Congo, Nigeria, South Sudan and Burkina Faso, the combination of violent conflict and the pandemic has led to a dramatic rise in the number of people living on the brink of starvation. In the face of the pandemic, the World Food Programme has demonstrated an impressive ability to intensify its efforts. As the organisation itself has stated, “Until the day we have a medical vaccine, food is the best vaccine against chaos.”

The world is in danger of experiencing a hunger crisis of inconceivable proportions if the World Food Programme and other food assistance organisations do not receive the financial support they have requested.

The Norwegian Nobel Committee wishes to emphasise that providing assistance to increase food security not only prevents hunger, but can also help to improve prospects for stability and peace. The World Food Programme has taken the lead in combining humanitarian work with peace efforts through pioneering projects in South America, Africa and Asia.

The World Food Programme was an active participant in the diplomatic process that culminated in May 2018 in the UN Security Council’s unanimous adoption of Resolution 2417, which for the first time explicitly addressed the link between conflict and hunger. The Security Council also underscored UN Member States’ obligation to help ensure that food assistance reaches those in need, and condemned the use of starvation as a method of warfare.

With this year’s award, the Norwegian Nobel Committee wishes to turn the eyes of the world towards the millions of people who suffer from or face the threat of hunger. The World Food Programme plays a key role in multilateral cooperation on making food security an instrument of peace, and has made a strong contribution towards mobilising UN Member States to combat the use of hunger as a weapon of war and conflict. The organisation contributes daily to advancing the fraternity of nations referred to in Alfred Nobel’s will. As the UN’s largest specialised agency, the World Food Programme is a modern version of the peace congresses that the Nobel Peace Prize is intended to promote.