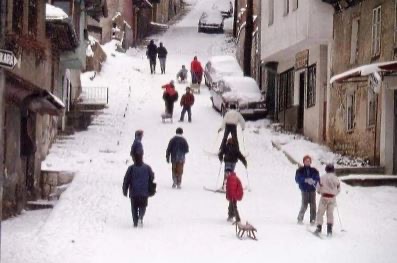 The snow that has fallen in the last two days has especially delighted the youngest and awakened nostalgia for adults. Somewhat older generations of Sarajevans remember sledding down the neighborhood (mahala), which has long since been replaced by enjoying snow games in the nearby mountains.

Even though groups of boys and girls sledding and playing in the snow can still be seen in some Sarajevo neighborhoods, these activities used to be much more frequent before.

Technology has separated today’s children from playing outside the home, and snow games or sledding on the nearby hills in the settlement, as well as sledding down the street in the neighborhood have become a real rarity. The recognizable sledding down the Sarajevo mahala will remain a symbol of onetime.

Earlier, Sarajevo’s neighborhoods were surrounded by snow in the winter, which was a real joy for the kids who used every moment to sled down the sloping streets. This practice was especially pronounced in the old part of Sarajevo, and children sledded down Alifakovac, Vratnik, Visnjik, Sedrenik, Bistrik…

Many are nostalgically leafing through their old albums, which include some photos from sledding, as well as other “mahalagames”. In such photos, the carefreeness of the little ones and the smiles on their faces are visible. Unfortunately, the recognizable socializing and games of the little ones in the neighborhoods have disappeared over time, but beautiful memories have remained for many generations.