From May 2021 to the end of 2022, 33 hearings in the case against Alija Delimustafic et al were postponed, and the total costs of the defense ex officio in that period amount to almost half a million BAM, the Sarajevo Cantonal Court told the Balkan Research Network of Bosnia and Herzegovina (BIRN BiH).

The Court noted that the mentioned costs collectively refer to all actions undertaken in the investigation phase, the preliminary hearing phase, and the main trial phase.

This indictment charges the first defendant, Alija Delimustafic, with having organized a criminal group from 2009 to 2016 that, among other things, illegally registered and resold real estate – mostly of deceased persons in the Sarajevo area – obtaining a financial benefit in the amount of more than ten million BAM.

They were charged with organized crime, abuse of position, violation of the law by a judge, money laundering, document forgery, fraud, and helping the perpetrator after the crime was committed.

In this case, the indictment was filed in October 2017, but the start of the trial has already been postponed several times due to various reasons, the most common of which was the failure of the defendants’ representatives to attend the scheduled hearing.

A new hearing in this case is scheduled for January 31st, Detektor reports. 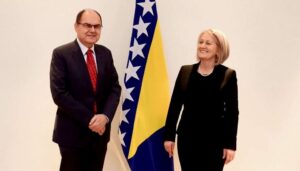