The member of the Presidency of Bosnia and Herzegovina(BiH), Denis Becirovic, responded to the views of Milorad Dodik, the President of Republika Srpska (RS), the entity in BiH, on harmonizing positions with Serbia regarding BiH’s participation in the European Union (EU)-Western Balkans Summit on December 6th in Tirana.

Becirovic said that BiH is an independent, sovereign state and a full member of the United Nations (UN).

“Representatives of lower administrative-territorial units in BiH do not have any authority in conducting foreign policy. Also, neighboring countries cannot and will never be able to decide on the foreign policy of BiH. That is decided by the competent state authorities. Milorad Dodik’s unfounded views and unauthorized interference in issues that they are not in his jurisdiction, have no legal force,” stated the member of the BiH Presidency.

Becirovic emphasized that any harmonization of views between the President of BiH entity of the RS and the president of Serbia has no impact on the decision of BiH.

“Dodik and the BiH entity of the RS were not even invited to participate in this summit in any format, so it is pointless to even mention the entities’ positions in the context of participation in the summit in Tirana. The Presidency of BiH made a decision by which it accepted the invitation to participate in the Summit EU-Western Balkans, and agreed on who should represent BiH,” concluded Becirovic, Klix.ba reports. 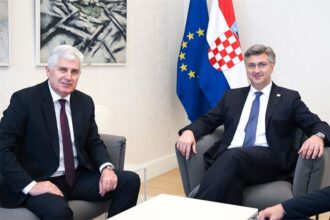