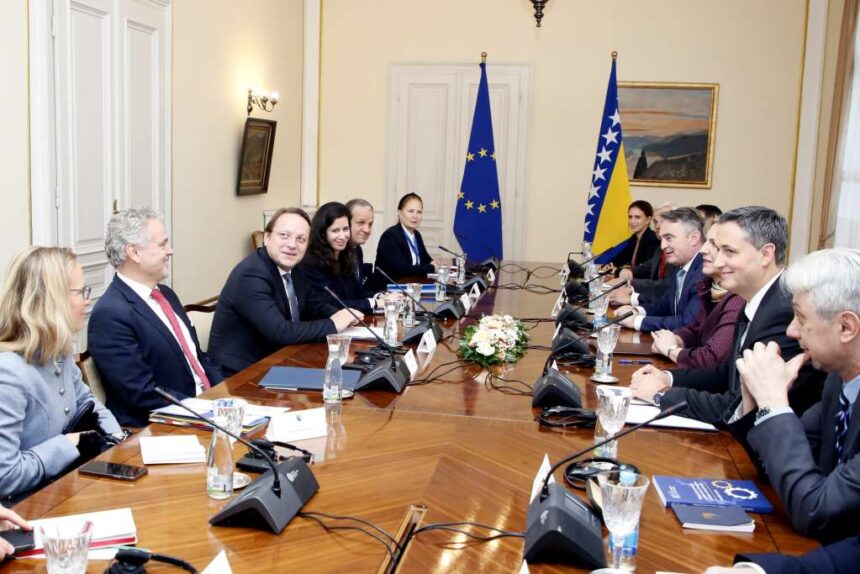 The chairperson and members of the Presidency of Bosnia and Herzegovina Željka Cvijanović, Denis Bećirović and Željko Komšić met today with the European Union Commissioner for Neighborhood and Enlargement Olivér Várhelyi. After the meeting, they all agreed that BiH’s accession process with the EU has to be faster.

Cvijanović also called for the activation of the coordination mechanism in order to clearly know who is performing which tasks and in accordance with the constitutional competencies to respond to the challenges and implement reforms in this sense.

Bećirović said that the conversation with the commissioner was encouraging, adding that the granting of candidate status for BiH in December would be an encouragement for all people in BiH, stressing that the BiH institutions must start working on reforms because this is an obligation that BiH must fulfill.

Commissioner Várhelyi arrived on a visit to Bosnia and Herzegovina at a crucial moment for BiH’s path to the EU, after the European Commission recommended the granting of candidate status for BiH. The commissioner expressed hope  that this would happen in mid-December.

“It has been recommended that BiH be granted candidate status without delay, but it comes with high expectations. The EU path for BiH is open, but results are expected from BiH, which should be achieved without further delays, and it is up to the political leadership to make it a reality,” said Várhelyi.

He noted that it is crucial to provide tangible and concrete results that could be presented to the Council of the European Union.

In order for this to happen, he added, the Council of Ministers of BiH in the old convocation is expected to fulfill everything related to the adoption of key legislation, and the newly elected Presidency of BiH is expected to have the 14 priorities of the European Commission as the backbone of their future work.

Positive News: Medina Heco from Sarajevo traveled to Istanbul for Treatment
Next Article