Political representatives from Republika Srpska (RS) continue to block the work of institutions of Bosnia and Herzegovina (BiH). Although the session of the Council of Ministers of BiH was scheduled for today, it is clear that it will not be held, just as the session of the House of Representatives of the Parliamentary Assembly of BiH was not held on Tuesday. The Office of the High Representative (OHR) calls for respect for the BiH Constitution.

The OHR warns that any action by political parties to block BiH’s institutions is a step in the wrong direction. Actually, it is a disservice to the citizens for who these parties claim to represent.

“The OHR expects all political parties to respect the Constitution of BiH and ensure the smooth functioning of state institutions and the exercise of their constitutional and legal powers. In this regard, it must be mentioned that the budget of BiH institutions should have been adopted in December last year, but that has not been done yet, ” Valentin Inzko, outgoing High Representative in BiH, said.

Further, the SNSD was also asked to react to these warnings. Journalists did not receive their comment until the end of the report.

Even though after the joint meeting, the political parties from the RS sent a message of unity – the SDS already doubts the SNSD. They are conducting a political campaign and have already violated the agreement on the boycott of the work of institutions at the level of BiH, as the party announced.

“We do not believe in the sincerity of the SNSD. I regret it. I would like to be wrong when it comes to consistency and complete sincerity in this situation as well. But, we give another chance to be united, ” stated Miladin Stanic, head of the SDS Party Caucus in the RS National Assembly.

Unity is already questioned, despite the expectations of the public in RS. Analysts state they cannot predict the development of the situation in BiH.

“Predicting the development of the situation is ungrateful, but it is certain that Serbian representatives will not stop now and must not allow, because of their people and the mandate that was assigned to them, that this situation escalates, so a compromise must be found now,” told Vojislav Savic, a political scientist.

“When it comes to the normal manifestation of power, we don’t have it, not even in traces. Therefore, I think that there can be no specific effect for the citizens of BiH in this sense. Of course, it all depends on what kind of blockade will be and to what extent they will go with all of this, ” said Adnan Huskic, a political analyst.

It is unknown in detail how the boycott of work of BiH institutions is interpreted. A meeting of Milorad Dodik as a member of the BiH Presidency and the Hungarian ambassadorhas been announced for today, but in Banja Luka, in the building of the Government of the RS, BHRT writes. 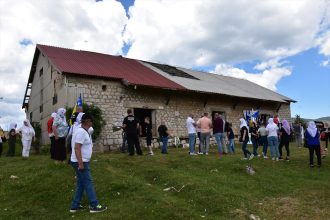