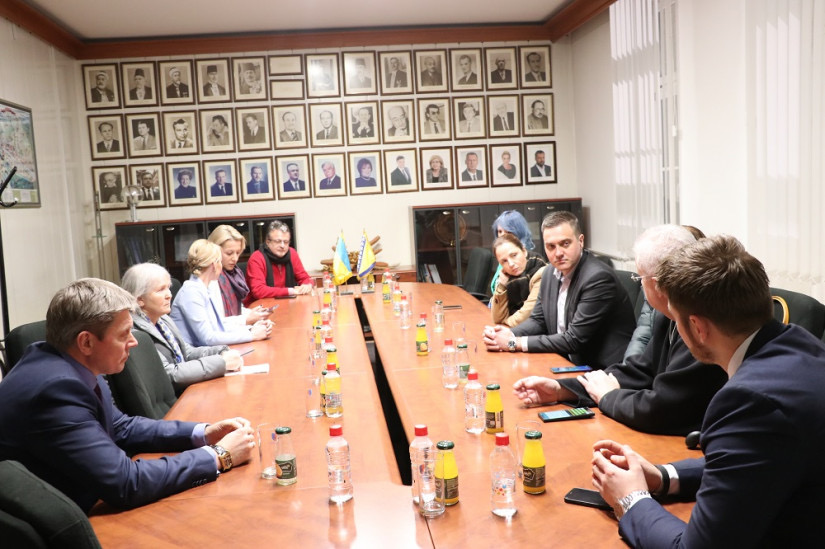 The Ukrainian delegation was represented by Tetjana Scerbak, Deputy Governor of Kyiv Oblast, and Violetta Dvornikova, Advisor to the Mayor and Deputy of the City Council of Irpin, and Deputy Head of the Kyiv Regional Branch of Political Party ”Batkivshchyna”. As witnesses of the aggression, they spoke about the consequences of the destruction of Ukrainian cities, as well as the sufferings of their population. Serhii Miniailo, Charge d’Affaires of the Embassy of Ukraine, and Nenad Canak, member of the Assembly of Vojvodina and president of the Committee for European Integration and Interregional Cooperation of the Assembly of Vojvodina, were also participants in the forum.

The support of the state should be stronger

”I want to point out that we feel the need to help our friends from Ukraine because Sarajevo also survived a terrible experience during the siege. Sarajevo was among the first to condemn Russia’s aggression against Ukraine, and as a sign of solidarity with the Ukrainian people, at the very beginning, we organized and provided medical assistance for threatened areas. We feel responsible and want to support the resistance of Ukrainians, to help them fight for survival, for their lives, cities, and homes, just as Sarajevo was defending,” Minister Nikolic said on this occasion.

Charge d’Affaires of the Embassy of Ukraine Miniailo thanked for support in organizing yesterday’s forum, saying that every act of solidarity and support is important.

”What I want to emphasize is that in Bosnia and Herzegovina (BiH) we have great support from the population and every time I come to a city I hear words of sympathy and solidarity. We would like the state’s support to be a little stronger, but we are aware that due to its structure, this is not possible for now within the framework that would be desirable for Ukraine,” he stated.

Yesterday’s forum is one of a series of forums that representatives of Ukrainian cities organize around the world, with the aim of telling the truth about the events in Ukraine, the consequences of war destruction, as well as the needs of the population, and with the aim of collecting aid for the reconstruction of the destroyed infrastructure.

Yesterday, members of the CS Government discussed with the representatives of the Ukrainian delegation the experiences of Sarajevo and BiH in the reconstruction of infrastructure after the end of the aggression against our country, and they made available the resources of regional institutions that can be useful for their work.