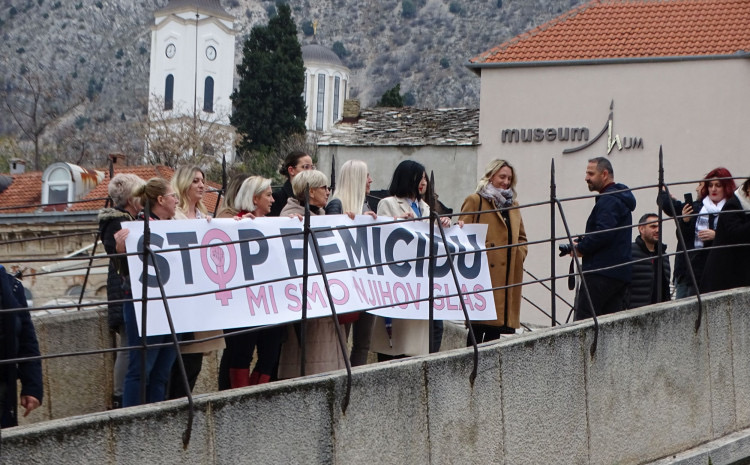 In Mostar, all women victims of femicide were honored with a jump without applause from the Old Bridge, which was symbolically performed by Semir Miro Kazazic at 11:55 a.m. yesterday.

In this special way, the members of the Citizens’ Initiative of Mostar within the framework of the ”16 days of activism”campaign wanted to draw the attention of the entire public to the problem of femicide.

”We want to draw attention”

Because, as stated by Ifeta Cesir Skoro, director of the Initiative, from 2015 until today, a total of 60 victims of femicide have been recorded, of which 11 this year.

”Unfortunately, the information we have is from the media. In this way, we want to draw the attention of decision-makers to preventive and repressive measures, given that the law does not recognize femicide in our country,” she pointed out.

It is interesting that this event was preceded by the commemoration of the anniversary of the great women’s protest in Mostar held in 1941 organized by the Association of Anti-Fascists and Veterans of the National Liberation War (SABNOR).

It is an event from December 3rd, 1941 when several hundred women of Mostar protested for hours due to the poor supply of the city, which caused numerous illnesses and hunger. They wrote a letter of protest with a request that this situation must be immediately changed and delivered the letter to the then City Administration.

They walked around the city

After that, they went to the Tepa City Market, where there were only turnips. As stated by Sead Djulic, president of SABNOR Bosnia and Herzegovina (BiH), they walked around the city for five to six hours, and then on Tepa they ransacked all the stalls with turnips and threw them into the Neretva, after which police intervened.

”We are not here to just remember the heroines of Mostar who 81 years ago had the courage to raise their voice and express rebellion in the occupied city but to, perhaps, in some way awaken a wider reaction. Because today are better times, but today we have more reasons to raise our voices,” he stated.

SABNOR will launch an initiative to place a memorial plaque where Tepa is located as a sign of this event.

”In the attitude towards women, things haven’t changed much since then. Because that protest from 1941 is just a continuation of female courage in Mostar, ever since Hana Hrvic, about whom the public knows very little. The women of Mostar deserve a monument, perhaps with the working title ”Heroines of Mostar”,” Djulic added.

Conference on Ukraine held in Sarajevo: Messages of Sympathy and Solidarity were sent
Next Article