HDZ President Dragan Covic held a media conference where he said that he would not respond to the invitation for talks with the SDA.

“Of course we will not respond to the calls of the SDA. There is no reason for that,” said Covic about the call of the SDA and added that he remains faithful to the signed agreement with the ”Eight”.

“Through that agreement, we will establish authorities through the entity and the cantons at all levels. We have an agreement with these partners to be in the Zenica-Doboj canton, where the Croats, i.e. the HDZ, should get two ministerial positions,” Covic told about the formation of the government in ZDK where HDZ is currently not part of the parliamentary majority.

He announced the continuation of negotiations with other partners, and that on Monday he expects meetings with the SNSD on the formation of government at the state level.

As for the Government of the Federation of Bosnia and Herzegovina (FBiH), he said that it would be more complicatedprocess, given that luck was in the hands of one, another or a third party, but that he expected the formation of the House of Peoples next week.

He also noted that additional changes are possible, and that he is glad that there is stability within the Croatian caucus, and that everything else will be solved by colleagues who are responsible for it, Klix.ba reports. 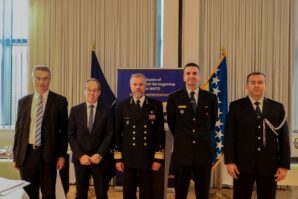