During his visit to HRT, HDZ President Dragan Covic said that he was currently working with the American and European administrations to put pressure on Christian Schcmidt to change the BiH Election Law, otherwise he expects the political crisis to escalate.

“My and our task today is to win these elections convincingly on behalf of the Croatian people, especially on behalf of the HDZ, which I have no doubt about who have authority and can change the laws in this time ahead of us, which they recently practiced on election financing, remove these dilemmas of implementing the decision of the BiH Constitutional Court on legitimate representation in the House of Peoples, “Covic said.

He pointed out that if that does not happen, he fears that it will be difficult to implement the elections after the elections.

“The political crisis we have today, I think it should escalate, we will need great efforts to prevent that from happening,” Covic said.

In terms of giving Bosnia and Herzegovina EU candidate status, the HDZ president said there were two problems.

“One is the pronounced unitarism that often borders on the irrationality of chauvinism, I would even say pronounced ultranationalism of Bosniaks, on the other hand separatism and what we are trying to do, which has made an absolute division, ie, complete dysfunction, inefficiency as the BiH Presidency, any member The presidency goes without any agreement on foreign policy, represents its own interest, the interest of its people possibly political parties.
He added that the relationship in the Council of Ministers, the House of Peoples of the Parliament of BiH and the House of Representatives of the Parliament of BiH is similar, which represents countless problems in the functioning of the state to make such a big step forward.
On the other hand, let’s not underestimate the role of international institutions, the Peace Implementation Council, the Office of the High Representative. How can you go towards the EU and have a protector who can pass laws, change constitutions, change people, etc.? There is a lot to reconcile. In addition, if we meet these basic conditions regarding the changes to the Election Law and a few other criteria that are in front of us, to make a step forward and have a candidate status, and then deal with life issues, “Covic concluded. 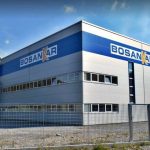 Italian Company to open Factory in BiH
Next Article