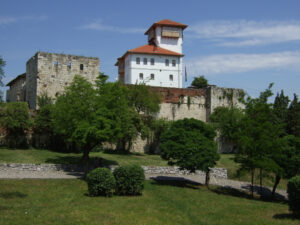 The town that is located on the slopes of Mount Majevica and Trebava on Gradasnica River, did not only become a legend but also gave birth to legends.

Besides the fertile plum orchards of this area, when you think of Gradacac – the first thought that comes to your mind is the Dragon of Bosnia – Husein-Captain Gradascevic, whose legend still lives.

Even though Husein-Captain is one of the most prominent BH historical figures as a general who fought for Bosnian autonomy in the Ottoman Empire, Gradacac has also other names that we are proud of – writer and revolutionary Hasan Kikic, historian Mustafa Imamovic and many others.

At the place where once was Palanka of Gradacac, in 1756 started construction of the fortress, as well as the whole complex of the Old Town. It was a well-organized fortress stocked with 15 heavy guns. Since the first of captain of Gradacac Mehmed Bey until the last Husein-captain, the fortress was fully completed.

The clock tower, built as the youngest object of its kind, was built during the reign of the Ottomans in BiH. When the Austro-Hungarians came to BiH, the clock for it was bought in Vienna and worked until 1923, when it was replaced by a new satellite. In World War II the clock stopped, and the clock tower was used as a warehouse for petrol.

“From archive documents is known that inside the fortress was Sultan Mehmed Fatih’s Mosque. It was certainly built before 1711, which corresponds to historical facts, although it bears the name of Mehmed-el Fatih. It was abandoned in 1878, as the Austro-Hungarian authorities and army closed the gates of the city. Already in 1892, district authorities demolished the mosque,” said from the Commission to Preserve National Monuments.

“Many secrets are hidden underground, such as the existence of a medieval fortress, various underground corridors (in the southwest corner of the town) that were built during the Ottoman period. From the above-ground parts of the fortress are visible arches of underground passageways, but not the vertical parts of their entrance,” as said from the Commission.

One thing is certain – a visit to Gradacac will delight you: greenery, purity, and spirit of the Dragon of Bosnia all over streets of Gradacac.