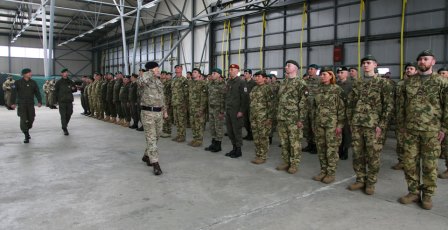 This was a particularly high-ranking parade, with EUFOR Chief of Staff Brigadier General József Szpisják among those receiving the European Union Common Security and Defence Policy Medal ‘Althea’ in recognition of their service in Bosnia and Herzegovina.

Brigadier General Szpisják said: “I am proud of the wide-ranging professional and social relationships I have created and fostered while I have been here: not just with the Armed Forces, but also with the Law Enforcement Agencies of BiH as well as many individuals and friends. I am glad to have added a valuable contribution to the peaceful environment for the population of Bosnia and Herzegovina.”

The EUFOR Chief of Staff was the most senior person on parade, as well as the highest-ranking Hungarian present. Hungary contributes a Company to the Multinational Battalion, and Hungarian soldiers comprised the majority of people on parade. Poland, Turkey and Austria were the other nations taking part in the parade. Colonel Werner Reismann, from Austria, also received his medal from General Everard and highlighted the significance of receiving his medal from the man who is responsible to the European Union for the overall execution of EUFOR Operation ALTHEA.

He said: “It was an honour to have received my medal directly from the Operation Commander General Everard today. It was a privilege to stand alongside so many professional women and men from EUFOR, and to have the important work we do in EUFOR recognised by our higher Operational Command. I will take away many fond memories of my time in BiH, but the spirit of international cooperation will be among my best memories.”

In his speech, General Everard told recipients of the medal that they “represent the practical and positive affirmation of support from your Governments and Armed Forces to EUFOR and the people of Bosnia and Herzegovina”. Austrian, Hungarian and Turkish soldiers make up the Multinational Battalion, as well as those nations being more widely represented in other EUFOR roles as is the case with Polish personnel. All work together as part of the 19 EU and partner nations to ensure a safe and secure environment for BiH as it progresses towards its European Union future.