In the “Charlama” (Zvono) Gallery in the “Skenderija” Center, an exhibition of photographs “Escape from reality – Sarajevo 1992-95” of the late Zoran Kanlic, taken during his visits to cafes and clubs during the siege of Sarajevo and photographing people he knew “from normal life”, was opened 4 nights ago.

Bojan Kanlic, son of the late Zoran, said that the initiative for this exhibition came from Zoran Lesic, who started the exhibition with Sasa Bukvic.

”It kind of shows that the people who were his friends, after he’s no longer with us and they don’t have any use for it, they’re trying to kind of revive that story and continue to show what he did,” said Bojan Kanlic, adding that this exhibition has been presented several times in the Netherlands.

He also recalled the laboratory they had in the apartment 30 years ago, saying that his father, due to the lack of digital cameras at that time, did everything by hand.

Photographer Dzenat Drekovic, describing his late colleague and friend, said that Kanlic was a man with a lot of empathy and philanthropy and that only such a person could take such photographs.

”Photography is subversive not when it terrifies and when it stigmatizes, but when it is thought-provoking and when it is spiritual. This is what Zoran Kanlic achieved with his photographs. It shows the emotions of people who were in the war more than any photo I’ve seen in my life, and I’ve seen a lot of them related to the war and war events,” explained Drekovic, adding that Kanlic, who passed away two years ago, was a good photographer, human being, and a top master and laboratory technician.

Speaking about the conditions in wartime Sarajevo, Drekovic explained that the photos were taken with minimal light and any necessary technical conditions in order to make a high-quality and correct photo. 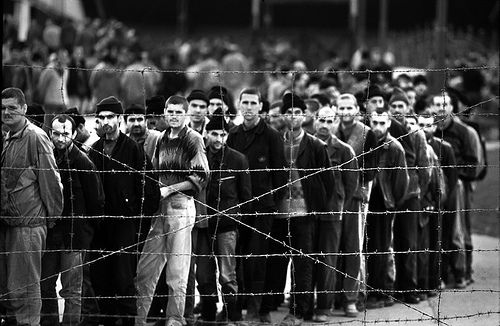 Will the Omarska Camp Memorial Center be built?
Next Article