European Parliament Special Rapporteur for visa liberalization for Tanja Fajon said to Srna that the possibility of reintroduction of the visa system to citizens of BiH is real, but it will not happen as quickly and easy as some EU member states expects it.

After the talks of the European Parliament and Council Regulation about the regulation that would introduce a mechanism for the temporary suspension of visa-free regime for all third world countries collapsed in late December, Fajon said she was pleased because there were too many attempts, especially in recent times to introduce the mechanism that could be used by politicians to gain political points in their own country by closing borders with the Balkans.

Fajon said that she does everything that is in her power to make the sceptical European governments see that the freedom of movement is a symbol of European integrations, and because of that it is crucial for countries of the western Balkans to have a visa-free regime.
She added that asylum seekers are primarily citizens of BiH, Serbia and Macedonia and in most cases they don’t qualify for asylum. Fajon said that governments must do more to stop the violations of freedom of movement.

On the other hand, she said, countries of EU should also consider giving the countries of the western Balkans status of a ”safe country” in order to shorten the procedure for seeking asylum, which Austria, Belgium and Luxembourg already implemented.

She hopes that visas will not be reintroduced, because it would be a huge step backwards.

‘’The future of the western Balkans is European, especially for younger generations who deserve a normal life without borders’’, said Fajon. 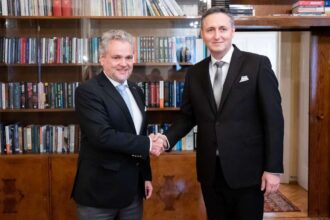