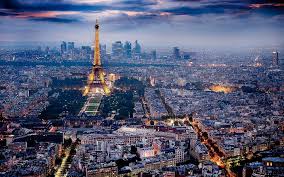 PARIS, April 22 (Xinhua) — Eleven contenders are vying for the Elysee Palace this year. They will run in the election’s first round on Sunday. The two candidates who collect the most votes will qualify for the run-off scheduled for May 7.
The following is a list of the main four contenders:
— Emmanuel Macon, 39, On the Move (En Marche)

Macron was an advisor to current President Francois Hollande during his election campaign and later became his economy minister in 2014 to replace ousted economy minister Arnaud Montebourg.
He was one of main figures that forged the law on growth and activity and responsibility pact, flagship pieces of the Socialist government’s roadmap to revive sluggish growth and lower unemployment in France.

Two years later, he quit his post to focus on his political career after creating his own political movement “En Marche” (On the Move), a movement he described “neither in the left nor in the right.”
Launching his own bid, Macron, a former investment banker, has been portraying himself as a “candidate for jobs,” and proposing “progressive” measures to “pull France into the 21st century.”

He pledged to further reduce French high employment charges and increase workers’ minimum wages by 500 euros (535.9 U.S. dollars) per year by cutting taxes on wages. He also wants to raise taxes on consumption and wealthy pensioners.
Furthermore, he promised to cut public expenditure by 60 billion euros in order to stick to France’s commitments to bring down budget deficit to the eurozone threshold of 3 percent.
He would also reduce corporate tax to 25 percent from the current 33.3 percent and to slash public sector headcount by 120,000 over the next term.

For months, opinion pollsters showed Macon maintaining the lead in first round’ voting and to beat Marine Le Pen, leader of far-right National Front party in May run-off.
— Marine Le Pen, 48, National Front (Front National)
Heading the National Front party, the 48-year-old lawyer portrayed herself as “the candidate of people” and a credible voice to secure secularism and French identity by toughening citizenship requirements, shutting borders and forbidding foreigners from access to any social aid.

She said to put to voters via a referendum a proposal to reserve certain rights, including free education, now available to all residents, to French citizens only.
If elected, Le Pen pledged to impose an extra tax on companies who hire foreigners and make harder for illegal migrants to legalize their situation.
Le Pen targets a GDP growth at 2.5 percent per year by the end of 2022 and a budget deficit at 1.3 percent, down from an expected rate of 4.5 percent in 2018.
She promised to cut charges on small enterprises and on households, in addition to lower retirement age to 60 from 62.
The French lawyer was the youngest daughter of Jean-Marie Le Pen, founder of the National Front (FN).

Marine Le Pen joined the National Front in 1986 at the age of 18. She joined its Political Bureau in 2000 and became the party’s vice president in 2003.
In 2011, she succeeded his father to head the National Front party created in 1972.
Le Pen was the only FN candidate to pass the first round of 2007 legislative elections and garnered 42 percent of votes in the second round.
In 2012, Le Pen came third in presidency election first round with an unexpected high vote of 17.9 percent.

In 2014, the party reported big gains in the EU ballots after collecting 24.85 percent of the vote and snatched 24 seats in the European Parliament.
— Francois Fillon, 63, The Republicans (Les Republicans)
Fillon, won the conservative primary runoff after beating former foreign minister Alain Juppe in November 2016 to represent the biggest opposition party in the 2017 French presidential race.

He had been the polls’ favorite until a fraud affair emerged on January 25.
Fillon had been put under formal investigation on allegations he paid hefty salaries for his wife for job she may not did it. Despite the affair which had rocked his presidential bid, he clung on.
Advocating for pro-market reforms, Fillon presented “more radical project,” based on a slash of 500,000 public sector jobs, lower corporate taxes.
He also wanted people to work more by increasing the working week to 39 hours from 35 currently to clinch public spending by 100 billion euros over five years.
Fillon wants to increase retirement age to 65 from 62 now and eyed a zero deficit by 2022.
As to security, he proposed to hire additional 10,000 police and gendarmes. He would also strip all French people who fight abroad for extremist groups of their French citizenship and ban them from returning to France.
He pledged to impose migration quotas to counter rampant migrant flows which may pose risk to domestic security and heavyweight economic burdens.
Studying law at university, he served as prime minister from 2007-2012, under the leadership of Nicolas Sarkozy. He also also managed several portfolios, including higher education, telecommunication, social affairs and ecology for the 1993-2005 period.

— Jean-Luc Melenchon, 65, Left Party (Parti de Gauche)
The veteran contender was an outsider on a hard-left platform “Unbowed France” before an appearance on two televised debates that helped him to surge in polls and narrow gap with other candidates.
Melenchon pledged a 100 billion-euro-investment plan to stimulate the French economy and to be partly financed by government borrowing,
He also said to raise public spending and for 2017-2022 period, 173 billion will be devoted to wage rises and job creation in a bid to slash unemployment rate to 6 percent.
In addition, he wants to increase minimum wage, reduce working week to 32 hours.
Melenchon said, if elected, he will work to withdraw France from NATO and to renegotiate European treaties to push through pro-growth policies. If talks would fail, he would put France’s exit from the European Union to a referendum vote.
Born in 1951, Melenchon has a degree in philosophy and was a teacher. He joined the Socialist Party in 1976.
From 2000 to 2002, he was education minister under the Socialist government of Lionel Jospin.
In 2008, he quit the Socialists and found his Party of the Left.
In 2012 presidential election, he ranked fourth with 11.1 percent of the vote. (1 euro = 1.07 U.S. dollars)