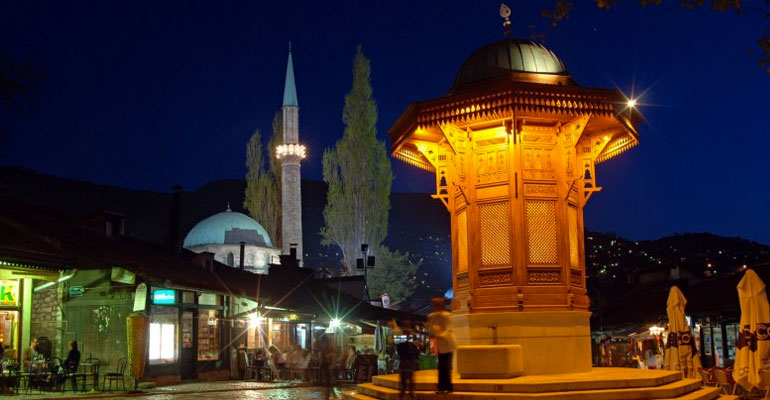 Sarajevo architect Mufid Garibija recalls that Sarajevo once had 104 neighborhoods (mahala) of about 50 houses. Each was named after its waqif. The mahala had to have its own masjid, it also had its own water, a cemetery, and even each of them had to have its own bakery.

”The mosque was a gathering place, not only for worship, but people in the mosque often presented and solved their problems. The peace was in prayer, but the life of the neighborhoods at that time mostly took place in the mosque and around the mosque,” explained Garibija to agency Fena.

A special scent of decorated courtyards

The trend of the mahala, he explains, was so significant, that the information about it that came to Seher-cehaja was important that even the Austro-Hungarians kept that standard – that all significant problems were solved from the mahala. These neighborhoods were kept as social communities until 1955 when the so-called homes of local communities appeared, Avaz writes.

”A high level of awareness of belonging and living in the community was present in mahala, with a particularly pronounced urban approach of its population, ie the mahala in which they live,” noted Garibija.

Today, the term ‘mahala’, he believes, is mostly devalued in most areas, including Sarajevo. The importance of mahala is still retained only in Herzegovina, more specifically in Mostar. It remained special, which is still a kind of brand of Mostar.

Garibija recalls that a particularly special life in the mahalas was lived during the month of Ramadan, when the special scent of decorated courtyards, houses, fresh flatbreads (somuni), and dishes prepared in the houses in a special way for iftar sofra was felt.

”Even today, Ramadan is a special month for us. But, it got a different form, it is more celebrated on the streets, iftars ‘escaped’ from our houses to the streets. We Bosnian Muslims do not need to follow some trends of others. If it is done like that in Turkey, ok, but in our country, it was not done in that way. It is not necessary, and it’s not polite for you to go to iftar on the street, in those restaurants. Someone will pass by and see if there is a plentiful iftar. In our country, it is modern to have great iftars,” told Garibija.

He emphasized that he remembers that there were no cafes open in Bascarsija during Ramadan and that coffee was drunk after tarawih prayer only at “Himzo” and “7 brace” (7 brothers), and also it was not possible to sit in the pastry shops.

Also, he talked about the example of an Orthodox man who had a tavern in Kovaci but did not want to give alcohol to anyone during Ramadan.

”People cared so much about each other, neighbors were taken care of, regardless of their religion. Today we throw it away, we do not live true Islam. We do not live a living Islam. Islam is a deed, not a story. Clean, do, help, don’t irritate, that’s Islam. Such Islam ‘bought‘ Sarajevo, and traveled all over the world. Itdid not spread with a sword from Medina. Muhammad Prophetand his Companions did not spread Islam to Indonesia with a sword, but with good deeds,” Garibija pointed out.

He also warned that the tradition of reciting the call to prayer from the minaret has been lost, even though the waqifis gave their money for that as well.

”How much more lively the atmosphere would be today. You are waiting for the muezzin to start reciting the call to prayer for iftar and to see mosque lightning, and now you are waiting for the cannon blast. Sometimes the technique is helpful, but in this case, it is not. This has upset our balance, unfortunately, times are like that, a new age is coming and going. It is our job to save as much as we can. We who live the faith must show by our actions what a Muslim looks like, what our religion is like,”Garibija concludes.