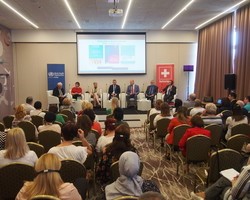 At a conference recently held in Sarajevo, participating health-care institutions from Bosnia and Herzegovina had a chance to showcase the achievements of a project funded by the Swiss Agency for Development and Cooperation (SDC) and implemented from 2013 to 2019.

One of the main achievements of the project was the endorsement by the Governments of 2 action plans for the prevention and control of noncommunicable diseases (NCDs), 1 in the Republika Srpska and 1 in the Federation of Bosnia and Herzegovina.

Both action plans were modelled after and complementary to WHO/Europe’s regional NCD action plan. They define the Governments’ priorities for tackling NCDs in the next 6–7 years. Dr Alen Seranic, Minister of Health and Social Welfare of the Republika Srpska, and other high-level health authorities in Bosnia and Herzegovina presented the main directions of the action plans and discussed them with international experts.

The WHO–SDC project addressed public health and policy aspects of the huge burden of NCDs in Bosnia and Herzegovina, in line with best international practices and evidence. In 2016, 4 out of 5 deaths in the country were due to NCDs.

The project placed special attention on cardiovascular diseases (CVDs) such as heart attack and stroke, as these cause half of all deaths in the country. In particular, the project focused on the principal health risks for developing CVDs, such as high blood pressure, increased blood glucose and lipids, tobacco smoking, overweight/obesity and lack of physical activity.

It included a comprehensive, large-scale intervention to improve the quality of and access to standardized cardiovascular risk assessment and management (CVRAM) services in primary health care/family medicine. This ultimately led to approximately 70% of the population, or 2.4 million people, having access to these services in their communities.

This was achieved through a multilevel approach. At the health-centre level, 101 family medicine teams from 26 health centres were accredited by respective agencies, and 2624 family medicine health workers, doctors and nurses were trained and certified to offer standardized CVRAM services. At the individual level, 4000 toolkits with clinical guidelines for health professionals, including 208 000 sets of informational and educational materials for the population, were disseminated. At the population level, a broader survey of the food environment in the cities of Sarajevo and Banja Luka was conducted for the first time according to WHO methodology.

Overall, in line with the health-in-all-policies approach, 37 bills with public health relevance were developed; of these, 20 were enacted in 2016–2018. A Public Health Network was also established using a whole-of-government approach and with the involvement of all ministries of the Republika Srpska Government.