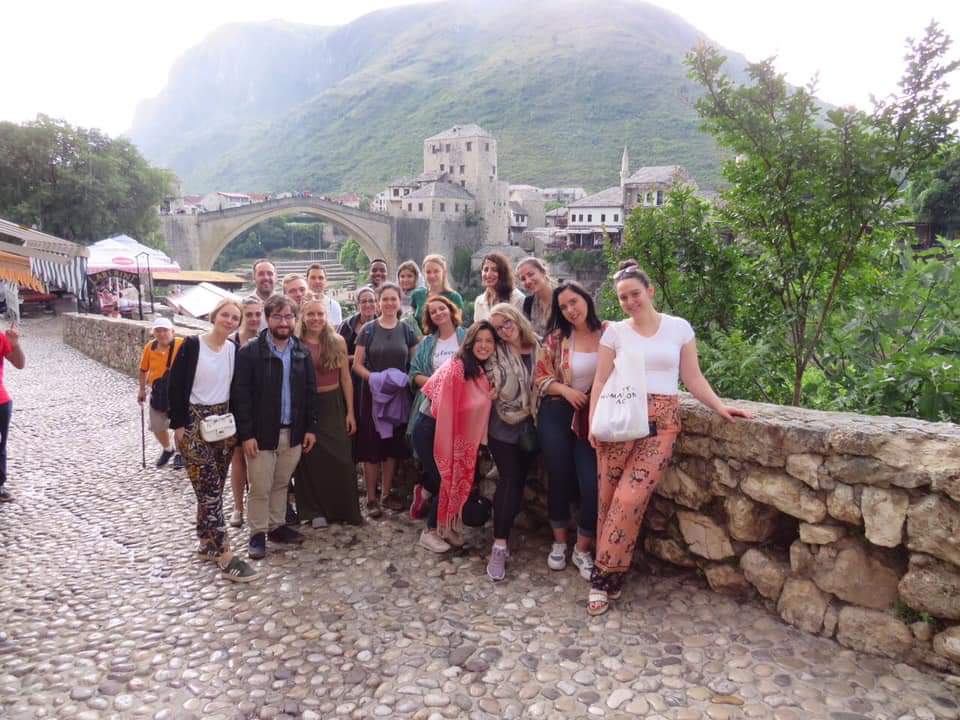 Intensive and demanding, the Humanity in Action (HIA) Fellowship brings together international groups of university students and recent graduates to explore national histories of discrimination and resistance, as well as examples of issues affecting different minority groups today.

In the interview with Sarajevo Times news porta, one of fellows Kate Powers said that she has the most wonderful memories and nothing but love for BiH, Sarajevo, and the HIA program.

“Of course, the country is facing some considerable challenges, but by no means does that define it. I was inspired by the resilience, welcoming nature, and sense of humor of all the people that I met. I also fell in love with burek, Sarajevsko, Balkan music, insanely beautiful views, and my new Bosnian friends. I cannot say enough about HIA and how grateful I am for the opportunity it gave me,” Mrs. Powers added.

She added that the program exceeded her expectations. The program discussed BiH’s difficult history but did not dwell on it, we and spent at least as much time talking about what’s going on now.

“We talked with a number of individuals and organizations about the important and inspirational work they are doing to tackle current challenges.

Initially, I was skeptical about the civic action project and whether it would be meaningless, or worse, harmful. (In my case, we were a group of 4 foreigners going around to divided cities and talking with young people. While I understand that our little video isn’t going to change anyone’s life in any dramatic fashion, it broadened our perspectives and began some interesting conversations with local film students back in Sarajevo. Sometimes, just getting the conversation started is a big deal, and I’m happy with how it turned out,” she added.

“I learned so much. As an American law student working toward a career in international law, learning about the shortfalls of the Dayton Peace Accords and gaining a more nuanced view of the role of the international community regarding intervention and post-conflict peacebuilding were particularly impactful for me. I learned some Bosnian, too: Želim da se vratim!,” Mrs. Powers concluded.

Fellows participate in intensive four-week educational programs located in cities across Europe and the United States, with approximately 20 local and international students in each program. Each program provides a site-specific curriculum for understanding the historical and cultural context in which challenges to pluralism and liberal democracy occur.

The programs are interdisciplinary, collaborative, and engaged learning experiences; they feature lectures and discussions with researchers, journalists, politicians, activists, and artists, as well as site visits to government agencies, non-profit and community organizations, museums, and cultural and memorial sites. The goal of these programs is to foster cross-cultural understanding and an appreciation of different perspectives and approaches for assessing past and contemporary social justice issues.

After the four-week on-site educational programs, Fellows return to their countries to develop and implement Action Projects to address social justice issues in their own communities. Past Action Projects have ranged from the production of documentaries and theatrical plays to community organizing projects, campaigns and social enterprises. The Action Project implementation stage is not a full-time commitment and is individually completed as the Fellow continues their education or career.

Graduates of the one-year Fellowship program then are invited to join a transatlantic network of over 2,000 alumni as Senior Fellows. Senior Fellows have developed careers as entrepreneurs, artists, scientists, journalists, researchers, performers, writers and professionals from all disciplines, united by a shared commitment to advancing human rights through civic engagement. Humanity in Action provides Senior Fellows with opportunities for continued learning and engagement through annual international conferences on both sides of the Atlantic, professional Fellowship programs, study tours, grant competitions and more.

Shana Merrifield explains that the most beautiful part of BiH was the people; they showed her the strength of human resilience and the immense capacity for growth and forgiveness there can be. Although the remnants of war are still evident in everyday life, she is extremely hopeful about Bosnia’s future because of the compassionate youth she has met, and she strongly believes their journey towards reconciliation is stronger than the history of division that has broken apart close communities.

“I am extremely grateful for HIA and its director Jasmin Hasic for teaching me that active citizenship is about the genuine love and compassion for your community. Questioning our reality and continuing the pursuit of truth is about bringing justice to our communities. Reminding ourselves of the capacity of inhumanity goes to show that everyday prejudice is easily manipulated for cruel intentions, and that its greatest enemy is education and awareness,” Mrs. Merrifield explained to Sarajevo Times.

“HIA has gone beyond my expectations; I have never seen such a raw form of critical compassion until I participated in this program. I have learned that in the face of such immense power, it is the seemingly minuscule changes that we make that impacts those around us,” she added.

“HIA embodies the values I hope to emulate in my everyday life: choosing to act for benefit of my community against the overwhelming odds against us. They taught me that, despite my doubts, a little creativity and passion can amount to something powerful. Having the resources to make our own civic campaign has shown me that with guidance and discussion, we can create sustainable change. By continuing these conversations on injustice, we are practicing subtle forms of resistance that collectively becomes a powerful voice too loud to ignore. Thank you, Bosnia, for showing me what true hospitality, resilience, and love looks like,” Mrs. Merrifield concluded.

The Humanity in Action Fellowship in Sarajevo will delve deep into the topics of transitional justice, post-conflict identity politics, peacebuilding and socioeconomic transformation in marginalized local communities. The City of Sarajevo, and other important historical sites in its surrounding, will serve as a unique case study of the rich history of multi-confessional urban living in Europe.

Academically well-rounded, the program will add diversity to the educational experiences and broaden the Humanity in Action program scope beyond Western Europe and the United States. It will provide Fellows with an intellectual framework that connects issues in Bosniaand Herzegovina to both past and current global issues. It will combine intense site visits, insightful lecture-style sessions with high level speakers and workshop-based learning units, which focus more on discussions and Fellow interactions. This combination of learning methods will allow Fellows to develop interpersonal relationships that solidify and strengthen the program itself.

Fellows created an “artivism” civic campaign as part of the 2018 Humanity in Action Fellowship in Sarajevo.

What happens when citizens have the agency to represent their personal experiences in a city? What does a “map” look like when it is drawn/constructed by the people who inhabit the delineated space? What happens to a map when it encompasses themes beyond geography and topography? How can map-making subvert a history of occupation, annexation, and conflict in this region?

These are some of the questions Fellows from the Humanity in Action 2018 Sarajevo Fellowship program asked themselves when reflecting on the history of the country, and of Sarajevo more specifically, as a region whose borders have long been redrawn and dictated by imperial powers and the international community. Fellows then channelled their questions into creative energy to build an art-meets-activism “artivism” campaign to address the politicized and charged borders of Bosnia and Herzegovina, more specifically, of Sarajevo. Embarking on a mission to build an interactive, emotionally-driven map of the city that subverts conventional map-making processes, the project resulted in an interactive mapping campaign entitled “Tvoje Sarajevo” (Your Sarajevo) to make space for the citizens of Sarajevo to transcend location and ethnicity and define the emotional landscape of this city on their own terms.