Radoš Stevlić from Gornja Gorevnica near Čačak, who spent the most of his life as an immigrant, passed away two days ago in Phoenix, Arizona where he had lived for decades.

Stevlić was known to the public as a man who attempted assassination of Josip Broz Tito, for which he was sentenced to ten years in prison. He served his sentence in an U.S. prison.

Last year, in an interview he spoke about the arrest 40 years ago in Chicago and about reasons why he participated in the attempt of assassination of Tito. “”Just as my fellow fighters, I believed that Josip Broz is a fake emperor Šćepan Mali and that he does not deserve to rule Serbia. On the other hand, I was aware that our religion does not allow us to take a man’s life, so maybe it is better that everything ended the way it did. If we assassinated him then, nothing would change,” said Radoš.

As he described in that interview, at that time the Yugoslav government forwarded a list with the names of 146 persons to the State Department in Washington, demanding from the U.S. authorities to arrest them.

“State Department responded to these officials in Belgrade that they cannot arrest so many people, so everything came down to six of us: Nikola Kavaja, Stojiljko Kajević, Boško Radonjić, Životije Savić, Nikola Živović and me. The main accusation was attempt of assassination of Josip Broz Tito,” said Radoš.

Upon the arrival to the USA, Radoš was working in a factory in Chicago, but very soon he purchased a restaurant with 70 seats and rooms for rent, and at the same time started developing a private business with houses.

“I found my place in our immigrant circle and soon became the president of the Church Municipality Saint Nicholas in Chicago. I purchased one house every year, until the agents of the FBI arrested me in 1976,” said Radoš in the interview.

Radoš said the following about the trial in Chicago: “Kavaja harmed himself and all the others. There were nine points in my indictment, nine in Kajević’s indictment and five in Kavaja’s. My maximum sentence could have been 65 years, Nikola’s could have been 35. However, eventually they gave me ten years and the judge sentenced him to 20 years because he ruined the entire thing with his tongue.” 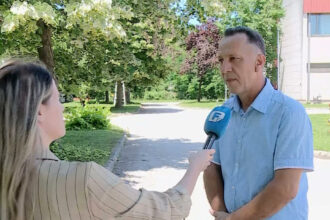