The fire in the area of ​​Konjic is still active, and so far an area of ​​more than 20 hectares has been burned, Konjic assistant mayor for civil protection and firefighting Husein Hodzic confirmed for Fena.

“It is very difficult to extinguish the fire, since it is an inaccessible area that is partly mined. Firefighters are putting out the fire on the road that goes from Konjic to Glavaticevo, we are currently working on breaking through and clearing it so that they can enter with vehicles and prevent further spread, but houses and the facilities are not threatened,” said Hodzic.

He adds that the arrival of two helicopters of the Armed Forces of Bosnia and Herzegovina is expected again.

“Helicopters have already made several overflights, and improved the situation, more than 20 hectares were burned, and there is a team of about 15 people on the ground, and we had a lot of calls, that is, offers of help from volunteers, the Federal Administration of Civil Protection (FUCZ ), of the Cantonal Administration of Sarajevo, but given the structure of the terrain, it is very unlikely to extinguish the fire from the ground, so currently a helicopter is our only help,” Hodzic pointed out.

The Citluk Fire Department confirmed that the helicopters of the Armed Forces of Bosnia and Herzegovina are currently extinguishing the fire that is still active in the Blizanac area, and all available forces are on the ground.

According to the latest report of the Federal Administration of Civil Protection (FUCZ), the fire in the area of ​​Surmanac in Capljina was brought under control with the help of helicopters of the Armed Forces of BiH, which arrived around 10:30 a.m. and dropped water on the fire site in several bursts. 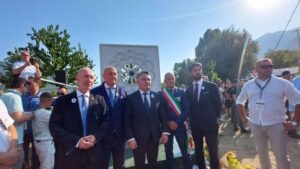