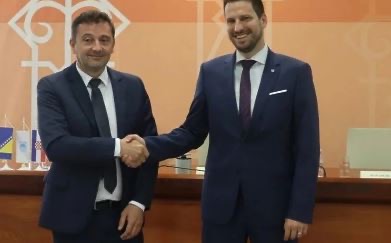 The Mayor of Mostar Mario Kordic and the Mayor of Osijek Ivan Radic signed an agreement on friendship and cooperation between the two cities in Mostar, which will improve friendly relations, especially in the fields of economy, culture, tourism, education, and sports.

Mostar Mayor Mario Kordic said that the two cities which twinned yesterday have many similarities, as well as the great friendship from before, which will be deepened by this agreement for the benefit of both cities.

The Mayor of Osijek Ivan Radic told that he was visiting Mostar for the first time and that he was delighted with the city and happy that his city had twinned with the largest city in Herzegovina because they have much in common and can help each other in further development.

“I believe we have things where we can deepen cooperation. Osijek and Mostar are university centers and there is good cooperation that can be even better. Both cities are centers of economic, cultural, scientific and medical work of their region, so through certain experiences our cooperation can be even better, and as we have officially developed a friendy relationship, I think that this will be in the near future, “ stated Radic, convinced that twinning will be of great importance for both cities, Klix.ba writes.

Will Mijatovic react? Thousands gather at ECtHR to demand Justice for Victims of Turkey’s post-coup Crackdown