The ceremony of signing the protocol was held at the cabinet of the Deputy Mayor for eductaion, culture and sport Zakira Šero. The protocol was signed by the Municipality Mayor Dževad Bećirević and Mirsad Purivatra, the president of the Association of citizens and artists ”Obala Art Centar” and the director of Sarajevo Film Festival. 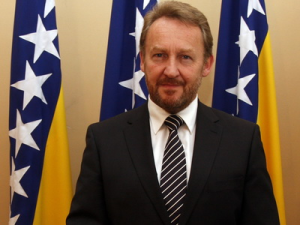 B.Izetbegović in official visit to Turkey
Next Article