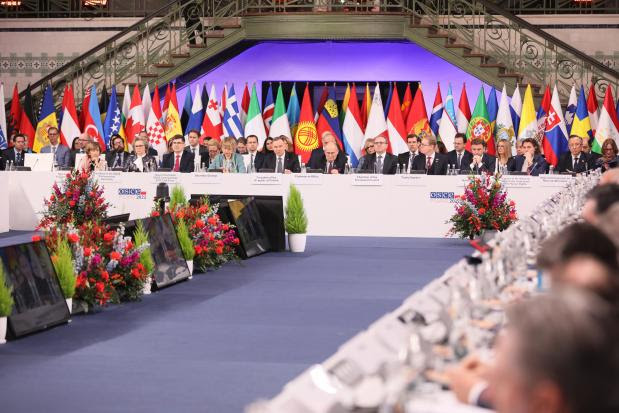 Foreign Ministers and senior officials from across the OSCE region meet in Łódź today and tomorrow for the 29th Ministerial Council at the invitation of the OSCE Chairman-in-Office, Polish Foreign Minister Zbigniew Rau.

“Faced with an unprecedented crisis posed by Russia’s aggression against Ukraine, I and my Chairmanship team have shouldered the responsibility of defending the OSCE’s principles and protecting its assets, namely its institutions, activities, projects, and – not least – its achievements,” he said. “I could not have chosen any other course. We were and are guided by the spirit of the Helsinki Accords.”

Following the Chairman-in-Office, the President of the OSCE Parliamentary Assembly Margareta Cederfelt said: “We cannot tolerate impunity. This OSCE Ministerial Council should take steps to establish a high-level body to examine the damages inflicted by the Russian Federation on Ukraine, and to assess the reparations that Russia should be accountable for. Russia started this war, and it must pay for it.”

In her report to the Ministerial Council, OSCE Secretary General Helga Maria Schmid said: “Russia’s war has a devastating impact on Ukraine and its people. On its neighbours. And in the face of this devastation, the OSCE’s support for Ukraine continues, including through the new fully donor-funded Support Programme Ukraine, as does its support to others including Moldova, Central Asia, and Southeastern Europe. The OSCE has unique expertise and unique access – and I believe we owe it to the 1.3 billion people who call our region home to continue this vital work.”

Who will chair the BiH House of Representatives for the next Four Years?
Next Article