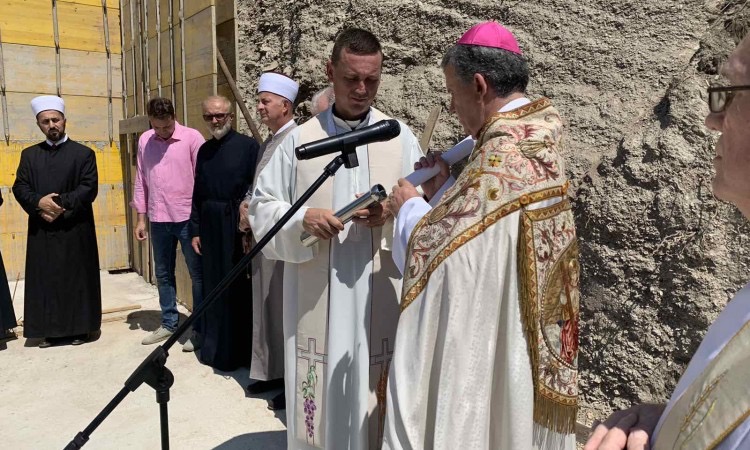 There were many positive reactions after the event on Sunday on the foundations of the future church of the Blessed Martyrs of the Drina in Gorazde. Namely, the foundations were blessed, and the clergies of the Orthodox Church, as well as the effendis from this place, unanimously supported the construction.

Believers of the Catholic religion, who arrived for the blessing of the foundations, and Archbishop Tomo Vuksic were welcomed, among others, by the Mufti of Gorazde Remzija Effendi Pitic, Imam Dzenan Effendi Imamovic, Archpriest Mihajlo Andric, as well as the Mayor of Gorazde, Ernest Imamovic.

“The Blessed Martyrs of Drina did not suffer to spread evil among people, but good, they did not suffer so that hatred or war is mentioned together with their names, but only peace. That is why today they gathered many people of goodwill on the foundations of their future Church, and among them, there arereligious representatives – Muslim, Orthodox, and Catholic, together with the mayor of Gorazde Ernest Imamovic. Thank you all,” it was announced in the message that was published on the official website of the Parish of Gorazde.

Exactly such messages and pictures from the city on the Drinawere a real surprise for Sandro Jurkovic, who after his visit to Gorazde shared his impressions on social networks.

“I experience the first big surprise when I enter the parish house, where I meet three of my neighbors from the village, Maslac and Ivankovic. Neighbor Senka, who normally lives in America, is a member of a group of American Croats which accompanies the young priest from Gorazde, Don Josip Tadic, and who is a great donor to the construction of this church. As far as I understand, there are only a hundred Catholics in Gorazde and the surrounding two larger towns. After the Holy Mass in the parish house, led by the military bishop Tomo Vuksic, who with a nice gesture awarded all those present with blessed rosaries, we headed to bless the foundations of the future church. It is only here that I experience the most beautiful surprises and scenes to remember, which literally made me shiver, and Senka almost cried. Firstly, the Orthodox priest came and hugged don Ante, after which two Imams came, who greeted the nuns with the greeting ‘Praised be Jesus and Mary’, and then with a hug, they greeted Don Josip. Then, they all greeted each other while waiting for the young mayor of Gorazde Mr. Ernest Imamovic, who helped to obtain all permits for the construction of this church. One woman told me: ‘If you only knew how much he helped us.’ Scenes like the one I personally witnessed today will not be found in the political media, because such scenes do not suit politicians. Don’t pay attention to Covic, Izetbegovic, Dodik, and others, and give us such people and scenes as possible in the daily media reports. It was really touching and memorable to watch all this from the front row. Beautiful, amazing, and really good. As Bishop Vuksic said: “We are all God’s children,” Jurkovic wrote.

The Church of the Blessed Martyrs of the Drina, whose construction recently began in Gorazde, should be roofed by December 15th, Klix.ba writes.

Judiciary in BiH: HR Schmidt’s Priority and “Cancer” of BiH Society
Next Article