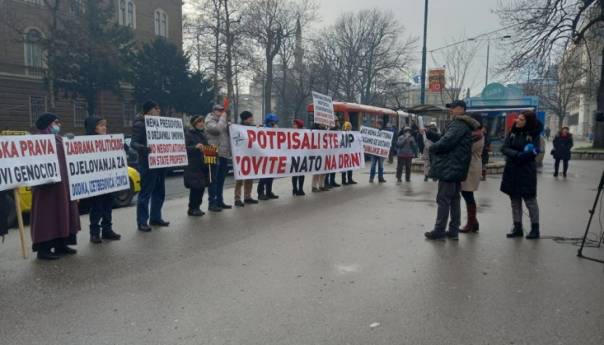 A group of citizens gathered yesterday in front of the building of the Presidency of Bosnia and Herzegovina (BiH) in Sarajevo and protested against the current situation in the country.

Citizens demand that the members of the Presidency of BiH urgently publish a special report on BiH’s progress towards full membership in NATO, as well as to explain the reasons for slowing down this process, and take all actions to meet the remaining conditions within the next 3 (three) months.

Apart from that, the request is for the Presidency of BiH to make a decision on how to implement the competencies of the Presidency of BiH in order to regulate coordination with international and non-governmental organizations in BiH and directly involve citizens in the reform process in BiH.

“We call on the Presidency of BiH to organize an international conference on human rights and civil liberties, in which not only BiH institutions will participate, but also citizens and non-governmental organizations,” it was mentioned in the announcement of the organizers of the “Awakening of Citizens” protest.

“We call on the BiH Presidency to make a special decision to oblige the citizens of BiH to waive their immunity from criminal liability for speaking out during their term in office,” the statement said.

Protests “Awakening of the Citizens” in the previous period were held in front of the Office of the High Representative (OHR), the United States (U.S.) Embassy, ​​the European Union (EU) Delegation, the BiH Parliamentary Assembly, as well as the Court and the Prosecutor’s Office of BiH.