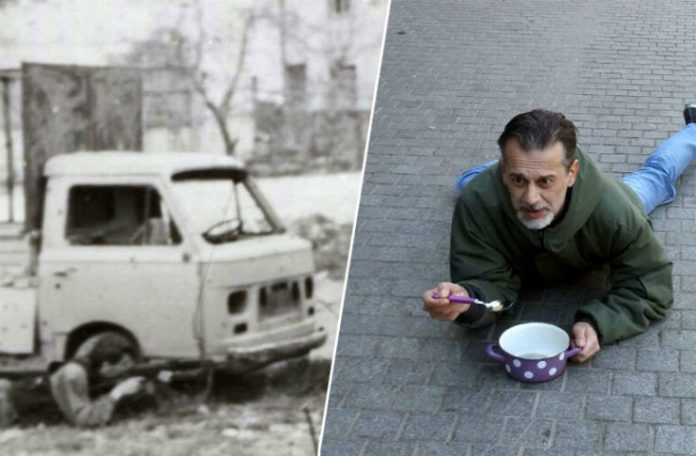 Photo of Sarajevan Haris Segalo with empty pot lying in front of the Presidency of BiH, was published by a large number of international media.

BH authorities paid more than 300,000 BAM for the reconstruction of a new sidewalk in front of the building of the Presidency, and they held the ceremony of its opening at the end of November. This provoked a huge reaction from the public. Segalo laid during a ceremony at the renovated sidewalk, and simulated that he is eating from an empty pot. He says that he wanted to emphasize that the government allocated huge money on unnecessary projects, while ex-soldiers are starving. Or they are homeless.

“When the war started, I joined the Army of BiH. I was only 19 years old. But I did not care for it. I proudly wore a gun and defended my country, first as a soldier of the 102nd Unit of the 1st Corps, and later as a member of the Guards Brigade,” said Segalo.

When the war was ended in BiH, Segalo was left without a job together with thousands of other soldiers. The brave soldier who used to defend the city finds it difficult to survive today. He says that he is afraid of becoming homeless. He lost his self-confidence.

“The hardest thing is that I do not have a roof over my head. Friends helped me to rent a house, but it’s difficult to find the money to pay the rent. My apartment is paid for December, but I could be on the street in January,” says Segalo.

How will the Dragons look in the Match against Gibraltar?
Next Article