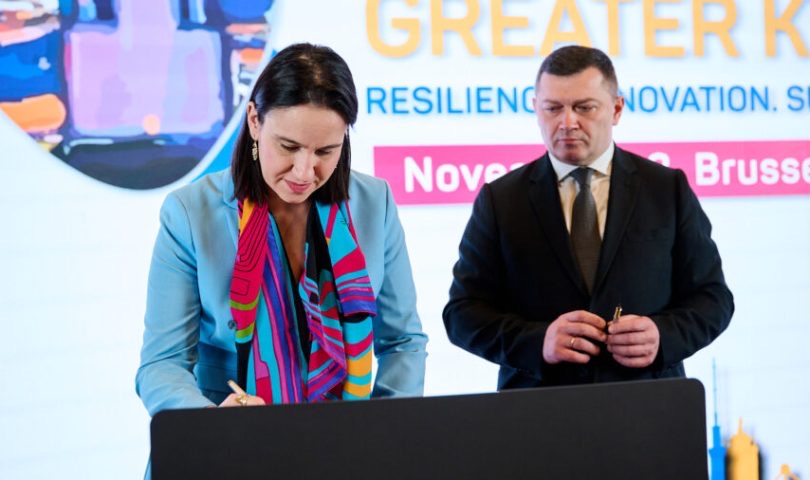 The mayor of Sarajevo, Benjamina Karic, and the representatives of Kyiv, Ukraine, signed an Agreement on the establishment of friendly relations in Brussels yesterday.

As stated in the agreement, based on the friendly relations of these two cities, cooperation in a wide range of economic, cultural, touristic, educational, and other areas, will be developed with the aim of mutual benefit.

The first article states that European values of democracy, freedom and the rule of law will be represented together with the aim of promoting peaceful coexistence in Europe. The second article states that friendly relations between the two cities will be established on the principles of equality and mutual benefit and that cooperation will be strengthened.

In the third article, it is stated that, based on the principles of equality and reciprocity, cooperation will be strengthened and experience will be exchanged in the areas of public space planning, infrastructure projects, new technologies, science and culture, tourism, and other areas. The fourth article talks about mutual support in crisis situations, such as humanitarian aid, but also political and economic cooperation.

An honor and a privilege

As Mayor Karic said in an interview, it was her honor and privilege to participate in the Investment Forum for Kyiv at the invitation of the mayors of Kyiv and Brussels.

At the Forum, in addition to signing the Agreement on the establishment of friendly relations between Kyiv and Sarajevo, Karic also held bilateral meetings with the Mayor of Paris, Anne Hidalgo, and the Mayor of Rome, Roberto Gualtieri, Avaz reports.

Varhelyi: It is recommended that BiH be granted Candidate Status without Delay
Next Article