Police officers in Sarajevo have started fining drivers of electric scooters who move on the sidewalk.

As Klix.ba writes, misdemeanor orders or fines in the amount of 50 BAM are issued to drivers.

“The movement of bicycles, mopeds and electric balancing means of transport is prohibited on the surfaces intended for the movement of pedestrians”, it is stated in the amended Law on the regulation of traffic in the area of ​​Sarajevo Canton.

The Ministry of Interior of Sarajevo Canton confirmed to Klix.ba that, according to the amended law, they issue fines in the above amount.

“A person who drives an electric balancing means of transport and uses a sidewalk intended for pedestrians to move, violates an offense from Article 37, paragraph 5 of the Law on Traffic Regulation in the KS area, and can be fined in the amount of 50 to 250 BAM,” they said.

On the other hand, electric mobility scooters are allowed to move on bicycle paths and bicycle lanes, as well as on the roadway.

If there is no bicycle path, drivers of mobile vehicles are allowed to move on the road. The law says that movement on the roadway is allowed in a width of no more than one meter from the right edge of the roadway.

“Bicycle riders and moped riders, if propelled by the driver’s power, are obliged to move as close as possible to the right edge of the roadway, and if there is a bicycle path, on the bicycle path, that is, the path,” states the state law, which still “does not recognize” romobiles.

This could cause problems on the roads and create additional congestion and endanger the safety of passengers, given that in Sarajevo, bicycle paths do not extend throughout the entire city and that drivers of mobile vehicles will be forced to drive on the road in some parts of the city.

Drivers of electric scooters are also advised to wear helmets, primarily for safety reasons, but also because of the likelihood that the police will soon start punishing them for this.

Last week, due to the increasing number of electric vehicles in Sarajevo Canton and the lack of clear legal frameworks, Cantonal Minister of Transport Adnan Steta submitted an initiative to regulate the movement of this means of transport to the Ministry of Transport and Communications of Bosnia and Herzegovina.

Zvizdic: Schmidt needs to improve the Integrity of the Election Process
Next Article 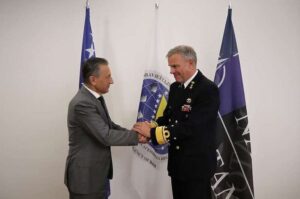