Written by: Sian MacLeod, former Ambassador and Head of UK Delegation to the OSCE, Vienna

Sarajevo is not just a beautiful, historic city. Set in a magical landscape, it is also an enchanting one, full of life and promise, but with a past as painful as any European city in living history.

To me, as to so many diplomats – indeed millions of people around the world – the names of Bosnia and Herzegovina’s towns and cities are familiar, because of their association with conflict and tragedy. This small, mountainous country is sadly still defined more by its past than its present or its future.

Contemporary Sarajevo honours its dead with calm dignity. Simple memorials convey profound sorrow. A city of graveyards, ancient and modern, the dead lie alongside the rumbling traffic and the footsteps of the living. Meanwhile, buildings pockmarked with the scars of a war that ended over ten years ago, stand in streets with few other clues of the city’s recent past.

It was an extraordinary privilege for me to lead to Bosnia and Herzegovina a visit by ambassadors representing 21 OSCE participating states in June 2016. We wanted to learn more about progress on post-conflict reform and reconciliation in an OSCE country where we invest considerable resource and attention, and about the work of our 300 strong OSCE Field Mission.

We came with a range of perspectives and met a wide range of people, each in their own way trying to build a bright future for their country. Some points of view and proposed remedies might have been contradictory. Competing for readiness to attribute responsibility for intractable problems may slow the pace of reform and reconciliation. Official accounts of progress on reform may be rosier than others. But overall there was a strong sense of shared engagement in the country and its future.

I left, though, puzzled. How is it that a country that has suffered so much and still faces such significant challenges, feels so full of promise and potential? How is it that a country with such a complex governance structure, fragile political accommodation and stability supported by the constitutional and practical involvement of the international community feels so ‘normal’. On the other hand, why do so many young and skilled people still leave to seek their fortunes abroad? (Many émigrés from Bosnia and Herzegovina, of course, make a substantial contribution to the lives of adopted homelands, including the UK.) And, above all, what will it take to overcome the remaining obstacles to a sustainable, prosperous future for all the people of Bosnia and Herzegovina?

Daily in Sarajevo, diplomats with far greater understanding and experience of the country than me argue for quicker reform, more active reconciliation, impartial justice, an end to educational segregation and inequality of opportunity. They are right to do so. It may be easier for outsiders to prescribe solutions than for local decision makers implement them, but that does not make them wrong.

The international community, including through the OSCE can, and must, continue to make a contribution. But the real hope of a brighter future lies with the people of Bosnia and Herzegovina themselves. And therein lies my optimism. The committed headmaster delivering above average results from students of an oversubscribed school studying in shifts in a seriously dilapidated building; the NGO worker addressing the immediate human consequences of sexual violence in conflict, the ability of the legal system to deliver accountability, and the longer term social and societal effects; the art gallery curator opening eyes to a wider world of contemporary culture; the former military commander building bridges between former adversaries in his hometown; the Grand Mufti breaking his Ramadan fast alongside representatives of all faiths. Such people lay the foundations of civil society upon which the country’s future rests. Bosnia and Herzegovina can and should build upwards, taking increasing responsibility for its own future.

As I prepared for this visit, my Serbian colleague gave me ‘The Days of the Consuls’ by Ivo Andric. Known throughout the Balkans by its original title ‘Travnik Chronicles’, the book reimagines the trials and trepidations experienced by the first diplomats to venture to Travnik, in the early nineteenth century a major outpost of the Ottoman Empire. As we reached Travnik, these days reached by a fast, well-surfaced road, I recalled both the eventful arrivals of those first foreign emissaries and the suspicion, abuse and curses which the Nobel laureate (himself a career diplomat) imagined greeted them. Nothing could have been further from our experience. In Travnik, as in Sarajevo, our large ungainly crocodile of foreign ambassadors was met with openness, courtesy and kindness. We could not have wished for a better reception. We left not only with a better understanding of present day Bosnia and Herzegovina, but also with heartfelt good wishes for the peaceful, secure and harmonious future that its people deserve. 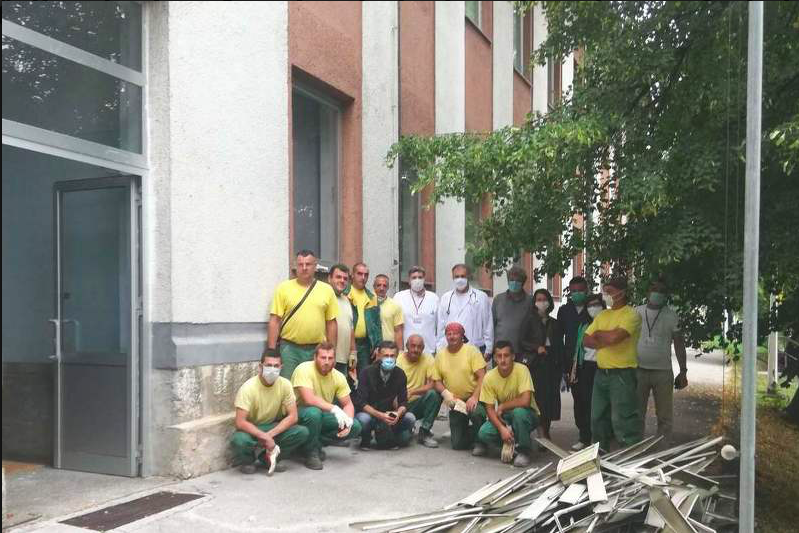 Work began on additional Isolation Ward in Sarajevo
Next Article Sarovic: We are watching the same Games for the fifth Time
Leave a comment Leave a comment