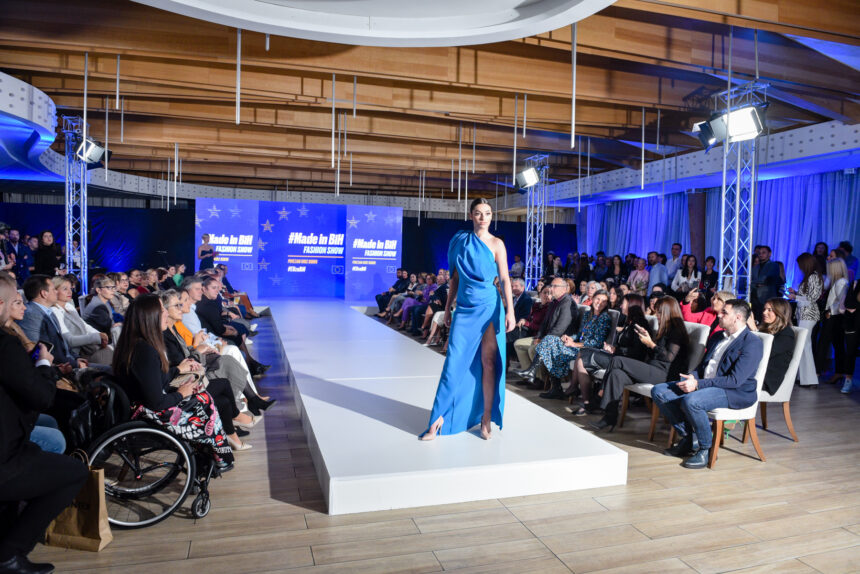 “Connected through good” is the key message that marked the Banja Luka fashion show entitled #MadeInBiH, organised on 22 September 2022 by the European Union in Bosnia and Herzegovina in collaboration with the European Fashion Passport festival.

The event gathered and connected BiH companies from the fashion and textile industry from Maglaj, Laktaši, Sarajevo, Zenica, Kostajnica, and other local communities that developed or launched their own businesses with support of the European Union.

Through the EU4BusinessRecovery project, the European Union has ensured grants in the amount of 1.3 million euros for 29 local companies in the sector of textile, clothing, leather and footwear production. The fashion show showcased creative works by nine companies – Bontex from Maglaj, Empress from Zenica, Galtex from Pale, Nerzz Bešlagić from Visoko, Sana Linea from Kostajnica, Lobby from Laktaši, NBM from Kozarska Dubica, Zenko from Zenica, and Catwalk from Sarajevo.

“Bosnia and Herzegovina has enormous potential and with the right support, entrepreneurs have shown they can succeed. By supporting businesses in this country, the EU is not acting as a donor, but as an investor in Bosnia and Herzegovina’s future on its way to the EU. Since the beginning of the pandemic, we have allocated around 70 million euros through various programmes to provide entrepreneurs and businesses in Bosnia and Herzegovina with the financial and practical support they need. Because we are indeed ‘connected through good’,” said Ambassador Johann Sattler, Head of the EU Delegation to BiH and EU Special Representative in BiH.

In the second part of the programme, the fashion show showcased garments by 30 fashion designers coming from the European Union, Ukraine and the Western Balkans, who are participants of the European Fashion Passport festival.

“The BiH fashion scene is modest and any activity revitalises it, but today we had an opportunity to see an outstanding show #MadeInBiH by our textile companies. I congratulate the EU in BiH for their support and initiative to work together with the textile industry. European Fashion Passport designers presented themselves tonight in a collective fashion show. I am glad to see the audience and designers, as well as models enjoy themselves. We don’t live for fashion, we live fashion,” said Adnan Hajrulahović HAAD, a BiH designer and Art Director of the European Fashion Passport festival.

The European Union project EU4BusinessRecovery, which is implemented by the International Labour Organisation in BiH, aims to mitigate the consequences the COVID-19 pandemic had on agricultural and tourism enterprises, micro, small and medium enterprises in the metal and wood processing sector, and in the textile, clothing and footwear sector, as well as on entrepreneurs and farmers. With this project, the European Union intends to support at least 150 companies to improve their business operations, thus securing more than 1000 jobs.