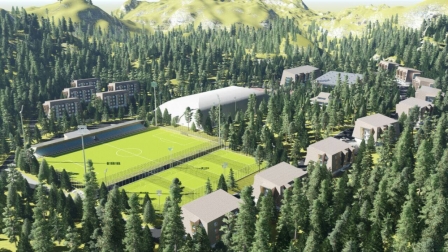 An agreement for the construction of Business and Sport Center Trnovo was signed on Thursday, and it will be one of the most modern sports complexes in BiH.

This project is realized by the Municipality of Trnovo and the Government of Canton Sarajevo, and it will be built with the aim for Bjelasnica to be visited by citizens and tourists during the summer season as well.

The center will be constructed on a surface of 11.21 hectares and at an altitude of almost 1.300 meters, on the right side at the entrance to Babin do.

As noted in the project, in the northern part of the complex will be built a football field (80 x 120 meters), which will be covered with natural grass.

An additional football field will be constructed as well, and it will also be covered with natural grass. Moreover, there will be one field for small football, handball, basketball and volleyball, which will be available for use in winter since they will be covered and will attract athletes who can make their preparations at Bjelasnica.

Sports hall will be included in the central facility of the center, which will be located in the southern part, in the contact zone with Babin do, next to business facilities.

The hall will have 500 seats for visitors and it will include accompanying facilities, while the hotel will offer 90 beds, meeting rooms, conference room, entertainment space, a pool, a fitness center and a spa, a gym, a sauna, a bowling alley, an ambulance and a pharmacy shop. The hotel will be connected to the sports hall.

Take a look at the video: