After the tragic event in the settlement Dobrinja in the fall of 2015, when the 12-year-old Salih was killed after a goal from the playground fell on him, extensive activities were launched in order to regulate the issue of jurisdiction, management and maintenance of children playgrounds.

In May this year, Government of the Sarajevo Canton reached a Decree on landscaping and maintenance of green and recreational areas in the Sarajevo Canton. According to the Decree, state of every children playground will be determined first, then the playground will be made entirely functional and safe, after which it will be under jurisdiction of the utility enterprise for maintenance of public green areas in the Sarajevo Canton. In this case, it will be the Cantonal Public Utility Enterprise Park, as the leading enterprise in charge of maintaining public green areas.

KJKP Park stated that a team which will work on these activities has been formed already, but that it will be fully operational after this enterprise takes over the jurisdiction.

Children and sport requisites and protective fences for which the Commission determines are not in order and that they cannot be used for their purpose will be removed within seven days from the day when their defect is determined. Municipalities at whose territory the children and sport playgrounds are located will remove the defected fittings at their expense and replace them with new requisites and devices in accordance with their financial abilities and the current standards, after which their maintenance will be taken over by the relevant utility enterprise. 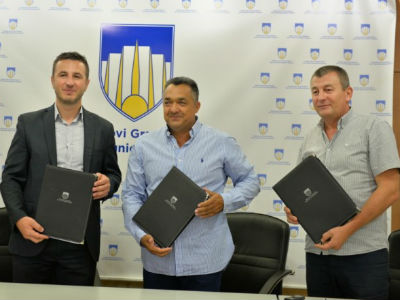 Contracts for the Construction of Three Major Infrastructure Projects signed?
Next Article How Tuzla solved the Problem of Water Reductions?
Leave a comment Leave a comment