The Central Election Commission (CEC) of Bosnia and Herzegovina (BiH) determined, after the control count, that Milorad Dodik, the leader of the SNSD, won the most votes for the president of the Republika Srpska (RS).

At its session, yesterday, October 27th, the CEC of BiH adopted the report on the results of the repeated counting of votes for the President of the RS, with six votes in favor and one against. Member Vanja Bjelica Prutina was against the adoption of the report due to, as she stated, the report’s numerous shortcomings.

A recount of the votes for the president and vice-presidents of the RS was ordered on October 10th, after numerous irregularities recorded during the election day were reported to the CEC.

”In relation to the original results of the General Elections for the level of President and Vice-President of the RS, the recount control confirmed that Milorad Dodik is the candidate with the highest number of votes,” said the President of the CEC of BiH, Suad Arnautovic.

Irena Hadziabdic, a member of the CEC, said that the election process was marked by a number of shortcomings, which are mostly of a technical nature.

The members of the CEC pointed out that they reported numerous irregularities to the BiH Prosecutor’s Office, but that there are no grounds for repeating the election for any level.

The new counting of votes at the Main Counting Center in Sarajevo began on October 13th.

Dodik: My primary goal will be RS

Milorad Dodik, a member of the BiH Presidency and the newly elected President of the RS, said at a press conference in Istocno Sarajevo that ”his primary goal will be the RS” because he received the support of the people there.

”I think we need to gather around the RS and its values, difficult and challenging times await us, not here but globally and regionally, in the European Union (EU), and this will inevitably affect the RS as well,” assessed Dodik.

He thanked everyone who participated in the elections, and invited ”all political factors to cooperate”.

”We will need a lot of skill to understand what the coming times are about, and to go through it together in peace and stability,”he emphasized.

He left the press conference without press questions.

The opposition in the RS announces an appeal

Branislav Borenovic, the leader of the PDP, one of the opposition parties from the RS that requested a recount, said in a press release that they will file an appeal against the CEC’s decision and that they will continue ”the fight for fair and legal elections by all legal and democratic means”.

”After the CEC itself cited numerous irregularities and violations of the electoral law at today’s session after they stated that 62 bags with unused ballots were missing, to make such a decision is to turn a blind eye to obvious election theft,”Borenovic assessed yesterday.

The opposition in the RS held two protest marches in Banja Luka and filed criminal charges against several persons, including Milorad Dodik, president of the SNSD, for “election theft”.

On Tuesday, October 25th, a rally called “Otadzbina zove” was held in Banja Luka, which was called by the leaders of the ruling parties in the RS, led by Dodik’s SNSD, because they are dissatisfied with the repeated counting of votes.

At this rally, they announced that they would not allow the”suppression of the electoral will of the citizens of RS”, as well as that the ”RS election commission” would be formed, even though the state commission is responsible for the elections in BiH, Radio Slobodna Evropa reports.

The Federal Government is procuring 1.000 Monkeypox Vaccines
Next Article 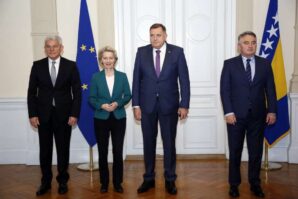