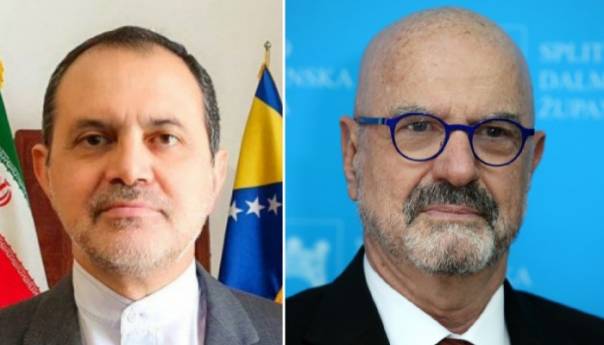 The Minister of Foreign Affairs of Bosnia and Herzegovina (BiH) Bisera Turkovic sent a demarche the day before yesterday because of the Memorandum of the Embassy of Israel on amendments to the Election Law of BiH, in which the HDZ proposal is supported.

Minister Turkovic’s demarche was supported by the Embassy of Iran in BiH, which announced itself through its Twitter account.

”The Zionist apartheid regime is not qualified to comment on the political fate of BiH,” stated the Iranian embassy in our country.

After the harsh message from the Iranian embassy, the Israeli ambassador to Croatia, Ilan Mor, spoke out.

”Is this murderous and very dangerous Mullah from Tehran even qualified to judge anything…,” he wrote on Twitter.

To recall, the day before yesterday, Minister Turkovic sent a demarche to the Ministry of Foreign Affairs and the Embassy of Israel in Tirana, regarding the Memorandum that was published 2 days ago in some BiH media.

The Israeli embassy said that “Croatian proposals for changes to the Election Law are welcome.”

Last Chance for an Agreement: Where to look for a Compromise on the Electoral Law
Next Article