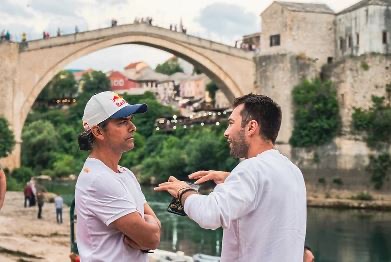 The renovated Duradzik jump place was opened in Mostar on Friday, where young jumpers have been preparing for the jump from the Old Bridge for years. The opening ceremony was also attended by the legendary Colombian jumper Orlando Duque, a great friend of Mostar and our country.

The legendary jumper Orlando Duque is a man who left an indelible mark in this sport and a great friend of Mostar.

“It’s nice to be in Mostar again. There’s always something about jumping here, now there’s a training jump place. I think this is a great opportunity, and I’m honored to be back in the city for a sport I love,” told the Colombian who won all awards that could be won in cliff diving.

Duque magnified the opening by jumping from the new jumpplace, as did other jumpers, including the famous Sarajevo “swallow” (lasta) Dino Bajric, and the winners of the jumps from the Old Bridge Vedad Basic (swallow, 2020) and Emel Tiro (leg jump, 2021).

“This jump place is very important. It can really be useful forlocal jumpers so that they can prepare at lower altitudes. That’s how we work, that’s how we train, that’s how we prepare for competitions. I think this is a great way to develop sports, to pass on the tradition to younger jumpers, to develop better technique, and understand different jumping styles. I am really proud that they managed to make a jump place like this in Mostar, “ Duque explained.

Renovated and adjusted to the standards for the development of this sport, the jump place will serve all jumpers from Bosnia and Herzegovina (BiH) and the world, with the aim of continuing to develop and raise traditional swallows, and to motivate as many young people to return to this sport. They plan to organize competitions, workshops, and jumping schools, in order to develop this sport and preserve more than four and a half centuries of tradition, unique in the world.

After saying goodbye to active competition, Duque is now the sports director of the Red Bull Cliff Diving World Championship, which is coming to our country for the seventh time this year. The world’s cliff diving elite will once again delight the audience with their incredible jumps on the Old Bridge on August 27th.

Maybe thanks to the renovated jump place, BiH will one day have its representatives at the Red Bull Cliff Diving World Championships, who will acquire the skill at “Duradzik”, Klix.ba writes.

Prices in BiH are rising dramatically, Officials only care about ‘their own Pockets’
Next Article