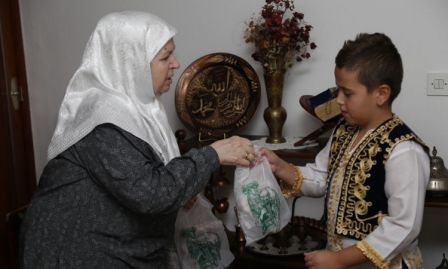 Although the modernization of life affects the entire environment in which we live, the breeze of the past times has survived despite everything. At least in some parts of the capital city of BiH, as well as in other places all over our country.

Eids and similar holidays represent a great opportunity for a family to gather. To share moments of joy with our dearest and closest ones.

However, in some older times, when the life used to be a lot slower, holidays were a chance to “look around” and share the joy with our neighbors and friends.

This was especially characteristic of the Eid al Adha. The sacrifice itself, by its character, represents a symbol of sacrifice to the only Creator, the God. However, its physical manifestation, or the Eid meat, is a way to remember our neighbors and friends as well, instead of just locking ourselves within our own family.

It is not strange that the very act of cutting meat was often the most sensitive part of the entire process. We are supposed to “weigh” each piece carefully so that someone does not get a much smaller, greasy, or bonier piece.

After the meat is cut, the youngest ones would be “on the scene” to perform their part of the job. Children always distributed meat from house to house, sending the greeting of the elders, and they would be rewarded for their efforts. Someone would give them a candy, someone cake or some other sweets, but children would mostly get the Eid money.

And although modern life carries some alienation among people, at least in the streets of Sarajevo or the so called old mahalas (mahala = street) you can still hear the children: “Selam alejkum (Muslim greeting), bajrambarecola, or Bajram serif mubarek olsun (Eid mubarak), dad sent a kurban (Eid meat)”.