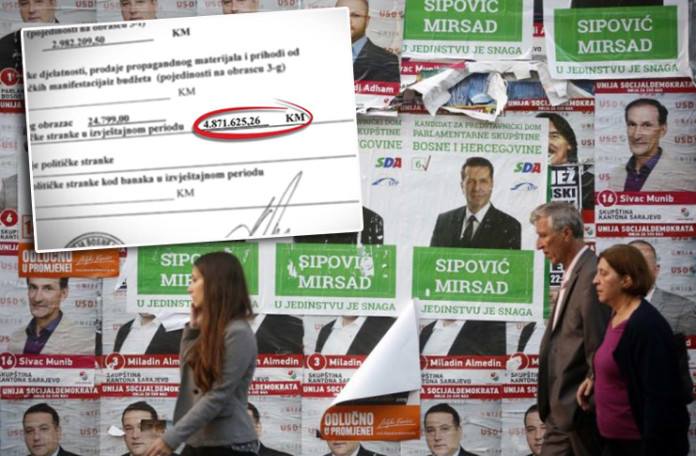 Nowadays, it is not easy to take a loan, not even for the parties in BiH. As it is said, many banks refuse to give them loans. Financial reports for the past year are completed. According to the reports, it is clearly that many parties operated quite well.

According to income in 2014, the wealthiest party was the Party of Democratic Action (SDA), whose income exceeded the income of the opposing Social Democratic Party (SDP) by 8.000 BAM. Total annual incomes were presented in amounts of nearly five million BAM. The SNSD party generated double less income. The HDZ generated an income amounting to nearly two million BAM, and the SDS exceeded HDZ by 260.000 BAM.

Costs of campaign were mostly lower than the annual income.

“In accordance with the Electoral Law, the parties could spend 54 million, and they all spent 7.642.000 BAM,” revealed Maksida Pirić from the Central Electoral Commission (CIK).

Transparency International believes that the parties moderate their reports, masking the black funds which are, among other things, used for paying performances of celebrities, which are not reported. Some economists share their opinion.

“CIK does not have many opportunities to check that, nor they have capacities for that,” said Ivana Korajlić from Transparency International.

Banks in BiH do not approve loans to parties as legal entities. Members usually take loans by themselves to finance campaigns. The centrals, however, “live” of the budget money.

There is no information about whether all political organizations submitted reports for the past year to the tax collectors. So far, it has been shown that the parties mostly violate the Law by exceeding the limit for donations, as well as by hiding real costs of campaigns. In the post-Dayton BiH, the courts have never proven systematic draining of funds from public enterprises for financing campaigns. There are such insinuations even today.