MAR-A-LAGO, the United States, April 6 (Xinhua) — Chinese President Xi Jinping said here Thursday that he is ready to work with his U.S. counterpart, Donald Trump, to push forward China-U.S. relations from a new starting point.
While meeting with Trump at the latter’s Florida resort of Mar-a-Lago, Xi said there are “a thousand reasons to make the China-U.S. relationship work, and no reason to break it.”
Since the normalization of China-U.S. relations 45 years ago, the bilateral relationship, even though experiencing ups and downs, has made historic progress and brought enormous and pragmatic benefits to the two peoples, Xi said.

The Chinese president said it takes political resolve and historical commitments from leaders of both countries to enhance the bilateral relations in the 45 years to come.
Xi also invited Trump to pay a state visit to China in 2017.
Xi said he has maintained frequent contacts with Trump through phones and letters for some time, and is glad to meet Trump here as his guest.
A sound bilateral relationship will benefit not only the two countries and peoples, but also the world at large, he stressed.

He added that cooperation is the only right choice for China and the United States, saying that the two countries are capable of becoming great cooperative partners.
The Chinese president also underlined the role of four newly-established high-level mechanisms for dialogue and cooperation between China and the United States in such areas as diplomacy and security, economy, law enforcement and cyber security, as well as social and people-to-people exchanges.

Xi urged the two countries to set up a cooperative priority list for early harvest, advance negotiations on the bilateral investment treaty, and explore the pragmatic cooperation in infrastructure construction and energy, among other areas.
He also said the two sides should properly handle sensitive issues, manage and control differences in a constructive manner, and strengthen communication and coordination in major international and regional affairs.

China and the United States should expand their cooperation in addressing global challenges, such as non-proliferation and the fight against cross-border crimes, Xi said.
Xi called on the two counties to strengthen communication and coordination in such multilateral mechanisms as the United Nations, the Group of 20 and APEC, so as to jointly safeguard world peace, stability and prosperity.

For his part, Trump accepted the invitation for a state visit to China with pleasure, and hoped to make the trip at an early date.
The United States and China bear heavy responsibilities as major countries in the world, he said, adding that he is full of expectations for the meeting and hopes to establish a sound working relationship with Xi for the greater development of bilateral relations.
The two heads of state also informed each other of their current priorities in domestic and diplomatic agenda, and exchanged views on regional hot-button issues.
Upon their arrival at Mar-a-Lago, Xi and his wife, Peng Liyuan, were greeted by Trump and U.S. First Lady Melania.

Before the in-depth, friendly and long-time conversation between Xi and Trump, the two couples also enjoyed the singing of a traditional Chinese ballad and the recitation of Chinese ancient poems by Trump’s grandchildren.
Xi arrived in the southeastern U.S. coastal town of Palm Beach earlier in the day for the first meeting with Trump, in a bid to chart the course of bilateral ties in a new era. 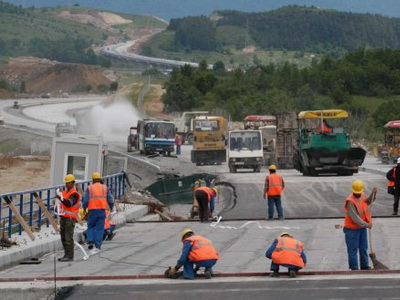