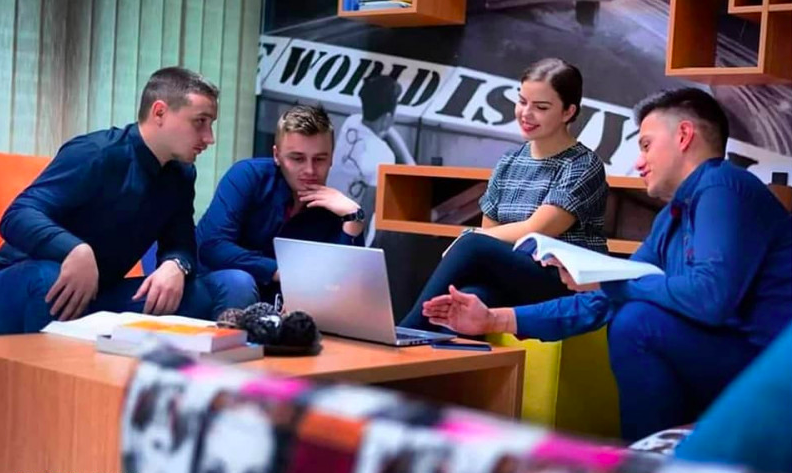 A year ago, a team of 5 young people from different parts of BiH, including Kenan Suljic from Tuzla, Amin Madzak and Semira Jablic from Konjic, Muamer Galesic from Bugojno, Sejo Ivkovic from Jablanica, came together to find a solution and help people who are struggling with depression and mental illness, whose number is increasing year by year.

They presented their project at the Start Me Up High School competition for high school students, organized by International Burch University together with the Association of High School Students in BiH (ASuBiH).

“That moment was a wind at our back, after which we realized that we had no restrictions and that everything is up to us in our future work,” said Amina Madzak from Konjic, a member of the team.

They say that the competition is unique, humane and demonstrates to young people that they can break down all barriers and build success and progress.

“When it comes to me and the moment of the decision to gather the team and apply for the competition, I never thought that we would reach this level where we are today, and of course, all thanks to the work and perseverance that began in this competition. Honestly speaking, all you need is an idea and a team, you can do it yourself, but two, three or four minds will always win one, ”said Kenan Suljic, the best high school student in Bosnia and Herzegovina, who gathered the D-App team.

D-App has continued to evolve and today they have a prototype, ie. the latest patent when it comes to healthcare applications. In this way, the diseased person can directly connect with a professional who can help him or her with problems and difficulties.

“The work of this application will be monitored on a daily basis by healthcare professionals with whom we have signed contracts. All those who use the application will be able to use it in four formats: animation, information, education, and contact with the expert – which is the main part of the application,” Suljic says and adds: “The users of the application do not have to take care of privacy, because the contract states that psychiatrists and psychologists are not allowed to disclose the details of the conversations they have had with their patients.

Support and calls are coming from all sides and even beyond the borders of BiH, which shows that the problem they have identified and the solution they have offered are needed by a large number of people.

The app has got more than 1,000 likes on its official Facebook page in a very short period of time and has been downloaded more than 200 times on Google’s App store.

There is already an interest in expanding the product to international markets to England, the Netherlands, Belgium, Serbia, and other countries.

“It is a wonderful feeling to get this much support and I have really convinced myself that everything is possible in our country, it is only a matter of how much work and effort we are willing to invest because there will always be those who will recognize and reward our success,” said Sejo Ivkovic, a member of the team.

The D-App team is currently focused on implementing a real product, where they work with a team of experts who will turn their idea into action.

“The need for the application is really huge and that is why we want to market it as soon as possible. An easy circumstance in the process is that thanks to Burch University, we have become part of the Burch StartUp incubator. We have been given a place where we can work in peace, a place to meet with potential investors, as well as mentoring support from top professors,” Muamer Galesic stated.