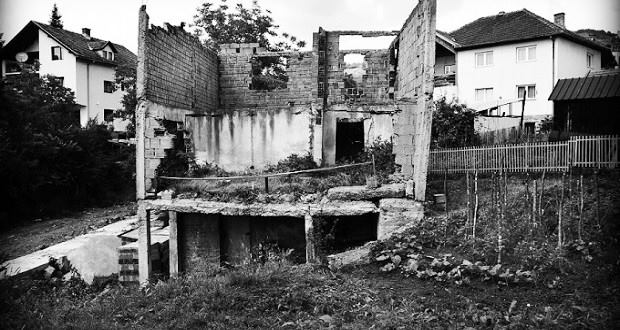 On the night of 13 June 1992 several Serb paramilitaries, led by Milan Lukic and his cousin Sredoje Lukic herded over 60 Bosniak Muslim civilians into a house on the edge of the town of Visegrad. Among the civilians were a seventy-five-year-old woman, six children between the ages of two and four years old, and a two-day-old infant. After they were forced into the house the Lukic cousins and their followers set the house on fire. 53 people died. Lukic had positioned his men around the house and as those trapped inside the inferno tried to struggle out, Lukic´s men picked them off one by one. Those that did manage to escape the fire were badly burnt. They now live with permanent physical injuries and with the mental anguish that accompanies those who have witnessed and survived the brutality and violence which Milan Lukic and his men inflicted upon them. The survivors were forced to leave family members or neighbors behind as they tried to escape the inferno. See : Pionirska Street Live Pyre

Two weeks later this pattern of mass killing would repeat itself on Bikavac, a Visegrad neighborhood. On the eve of 27 june 1992 Milan Lukic, Mitar Vasiljevic and a group of armed men arrived in several cars at a house in Bikavac. Milan Lukic had learned from the fire in Pionirska Street where he had killed 59 people. What he had learned was that he had could not leave any witnesses. Several people survived the live pyre in Pionirska Street, Lukic was not about to repeat his mistake. According to testimony, Milan Lukic´s cousin, Sredoje was among the men that took part in the mass killing. The car radio was blasting way Serb nationalist music, when Lukic and the armed men entered the house they instructed those inside to stay there. If they did not comply they would be killed. After that Lukic and his men left the house. At around 20.30 they came back and started knocking on the doors of several other houses in the neighborhood. In one of those houses lived Zehra Turjacanin, when the armed men entered the house they instructed the residents to leave, saying that convoy had been organized to take them out of Visegrad and towards Bajina Basta, just across the border in Serbia. According to Turjacanin; when they exited the house she noticed that there were no vehicles to transport them from Bikavac. Instead, the armed men led them, as well as many of their neighbours, to Meho Aljic’s house which was approximately 100 metres away. Zehra Turjacanin and the other women and children were instructed by the armed men to enter the house.

According to Zehra; when she entered Meho Aljic´s house, Milan Lukic pulled her gold her chain off from around her neck. Approximetly 70 Bosniaks ( Bosnian Muslims) were barricaded in Meho Aljic´s house including Zehra and her relatives as well as young mothers with their children and elderly people. The youngest child in the house was one year old. All of the people in the house were civilians. Most of them were refugees that had fled the surrounding villages and sought shelter in Bikavac until they would eventually leave Visegrad via one of the many promised convoy´s that were supposed to take them out of the town. A few local residents from Bikavac were also in the house. Meho Aljic´s house was a “ground floor house.” According to Zehra there was an atmosphere of fear in the house. All the exits had been blocked by heavy furniture and people were sitting on the floor with their backs against the walls. One of the witnesses saw Milan and Sredoje Lukic place a metal garage door against a door to prevent people from leaving.

Once they had barricaded the house Lukic and his men started throwing rocks and firing rounds into the windows, the bullets hit the walls as the people in the house ducked for cover. Subsequently, the armed men threw in grenades which according to Zehra killed several people; they also threw in some form of powder in order to induce mass suffocation. Two witnesses say they noticed Milan and Sredoje Lukic using petrol to set the house on fire. As the fire broke out it spread very quickly. Zehra had known Milan Lukic in her schooldays, Lukic had gone to school with her brother. According to her testimony she heard him saying; “it was time to set fire to us” One of the witnesses, whose house was some 200-300 meters away said that she had never seen a fire that big. Two other witnesses remember the screams of those trapped inside the house, “like the screams of cats” As grenade fragments entered Zehra´s left leg and her clothes began to burn and her skin began to burn she could see other people burning alive, they were “wailing and screaming” shutting her eyes tightly so that they would not burn, she managed to escape through a small opening about 65 centimeters under, or through the window of, the metal garage door, which was blocking the patio door. Touching the door caused severe burns to her arms and hands, leaving them permanently damaged. All the other people in the house burned to death.

After she escaped the burning house she saw Milan Lukic and several armed men laying in the grass, apparently intoxicated. They shouted; “stop” but Zehra kept on running shaking of her burning clothes during the run from Milan and Sredoje Lukic. In their intoxicated state they could not keep up with her. She hid in the nearby Serb neighborhood called Mejdan where she stayed in a ditch of nettles for several hours. She then returned to Bikavac and went to the houses of other Bosniaks, pleading with them to leave. After midnight she went to the house of two of the witnesses and told them that Milan Lukic had had set people on fire in Meho Aljic’s house and pleded with them, telling them of the fate that befell her and the others in the house and that everyone should escape. After having been to three Bosniak houses in Bikavac warning them about Milan Lukic, Zehra, exhausted and with burn marks all over her body went to the local Serb TO-command post ( Territorial Defense) which was in the Bikavac Hotel, she surrendered after warning all the Bosniak families she could. She lied to the two soldiers she encountered telling them she had been in an accident with a gas cylinder at home and that she had burned herself. She was afraid that if she told them the truth they would torture her. Zehra begged the soldiers to shoot her, she as a Bosniak Muslim could not go anywhere in her condition. Going to the command post was her only option. At the command post, a young Serb soldier took pity on her and hid her in a house across the street where four elderly women lived.

The next morning one of the young soldiers sent for a doctor to treat Zehra´s wounds at the house where she was hiding. The doctor and a nurse arrived at the house, gave her an injection left her some ointment and pills. The doctor told her that he could not return nor could he take her to the hospital because she was a Muslim. It wouldn´t be safe for her. Zehra stayed in the house for 11 days while the elderly tended her wounds with home remedies, such as sour milk. After the news spread that she had survived the fire, Milan Lukic offered a bounty for her, forcing her on the run. She set out on a ten-hour journey on foot to the settlement of Okrugla where she stayed for four days, those that saw her there said that her “condition was horrendous.” After Okrugla she set out journey together with Bosnian defenders from the Podrinje region who had come for the Bosniaks hiding in the forests and villages in the Visegrad area. They on foot, through woods, over hills roads to Bosnian-controlled territory in Medjedja. One of her fellow testified that Zehra was in severe pain and asked others to scratch her head as she could not do it herself given that her hands had been severely burned. In Medjedja she treatment for her wounds, later that summer a video of her while she was being treated for the wounds appeared, showing the gravity of her wounds. One of the witnesses at the trial of Milan Lukic that had seen Zehra in Medjedja her condition upon arrival:

Her entire face was black, burnt. It was a wound. Both her arms were bandaged, but they were not medical bandages. Those were just makeshift bandages, five or six of them. The wounds were so infected that when I tried to change the bandages and dress her wounds on her, whilst one arm as I took a couple of layers of the bandages I saw maggots coming out. I fainted at the sight of it.

In September 2008 Zehra came face to face with Milan Lukic again, at his trial in The Hague, for the first time since he had forced her and around 70 other Bosniaks from Bikavac to enter Meho Aljic´s house. She described “what it felt like to burn alive” She also described the the strange athomsphere in Visegrad in June 1992 as the town and it´s Bosniak inhabitants were being held hostage by serb authorities and at the mercy of one man. According to Turjacanin “fear reigned” in Visegrad. At night, she would watch from her balcony as Bosniak were men being killed on the Visegrad bridge; their bodies thrown into the Drina River. “I am alive. life is beautiful and I want to live it to the full”, Zehra Turjacanin concluded in her evidence at the trial of Milan and Sredoje Lukic. She has spent years in treatment in France, her “new homeland”, where she is trying to forget what happened to her in Bikavac in 1992, Bosnian News Platform writes.