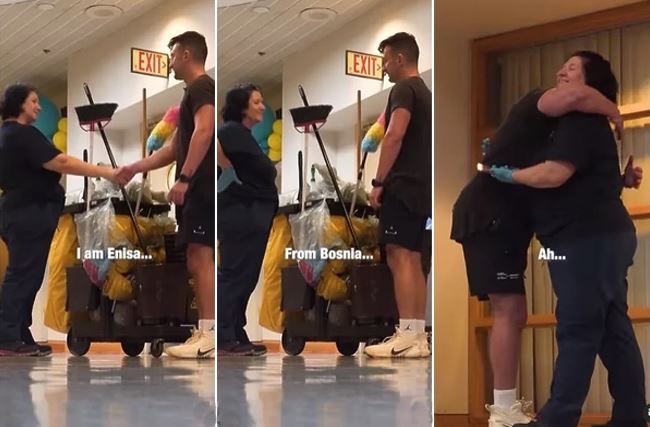 Zachery Dereniowski is a motivational speaker and medical student from Canada, who has won followers around the world with his posts where he manages to make people happy andreciprocate twice as much for their kindness. Among other things, he accidentally met one of our compatriots.

Zachery studied at the University of Sydney and specialized in mental health, to which he also dedicated educational posts on his profiles on social networks where he is followed by millions of people.

However, there are more and more videos where this 29-year-old approaches complete strangers and gives back his good deedfor their kindness.

Among the many people he made happy, there was a womanfrom Bosnia and Herzegovina (BiH), whose name is Enisa.

Zachery met Enisa at the University of Windsor in Ontario, where she works as a hygienist. With the intention of pleasing the first person who was kind to him, he stopped her by asking her to talk and explaining how he missed his family back home.

Despite her commitments, Enisa did not reject Zachery, but instead took her precious time to stay with him. In their conversation, she explained how she has been working at the university for 9 years. When asked how she likes it there, she replied that she had no choice and that she “needs to earn money”.

She herself spoke about her feelings and said she missed home: “I was very sad for a year or two, now I’m fine,” Enisa said, mentioning that she doesn’t have family in Canada, except for her daughter and husband. Towards the end of the conversation, Zachery revealed the background behind it all, and that he wanted to give $1,500 as a present to Enisa, who was just being so nice to a complete stranger.

Enisa seemed surprised at first, thinking Zachery was joking and refused his money.

“Save it for school, girlfriend…” she insisted, handing him his money back, which Zachery didn’t want to hear.

“I’m here until 11 pm tonight. If you need it, I’ll keep your money,” Enisa told Zachery.

In the end, she said her wish was for the world to be “without war and conflict,” after which she and Zachery shared a big hug.

The video was viewed by over 2 million people on Instagram alone, and there were numerous comments from users who said this was not the first time that Zachery had delighted them with his good work. Numerous such examples can be found on the profile of this young man who managed to make total strangers, homeless people and other random passers-by happy.