At almost 1,500m, the village of Lukomir, with its unique stone homes with cherry-wood roof tiles, is the highest and most isolated village in the country. Indeed, access to the village is impossible from the first snows in December until late April and sometimes even later, except by skis or on foot. A newly constructed lodge is now complete to receive guests. From there, you can do some magnificent hikingin the area along the ridge of the Rakitnica Canyon, which drops 800m below.

Lukomir is known for its traditional attire, and the women still wear the hand-knitted costumes that have been worn for centuries. A version of history of present-day Lukomir can trace much of their ancestry to the Podvelezje region of Herzegovina. These semi-nomadic tribes would come to Bjelasnica in the summer months because of the abundance of water. Podvelezje, a dry plateau above Mostar, could not provide the herds with enough water to sustain themselves over the summer months. For reasons not entirely known, many of the villagers from the Podvelezje region eventually made permanent settlements in the canyon and later in the place where it is now located.

Umoljani village is more easily accessible than Lukomir. The village was destroyed during the war, but by now much of it has been rebuilt. The natural beauty of its surroundings is the most striking in the area.

The south side is a typical karst landscape that is dry and rather barren. The north side is lush with thick forest and green pastures and is ideal for hiking, walking or a picnic. The remnants of ancient settlers can be found scattered around the village with many medieval tombstones perched on high ridges. The valley of Studeno Polje is a magical little place tucked behind the summer shepherd village of Gradina near Umoljani. 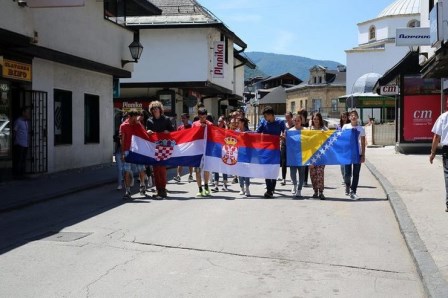