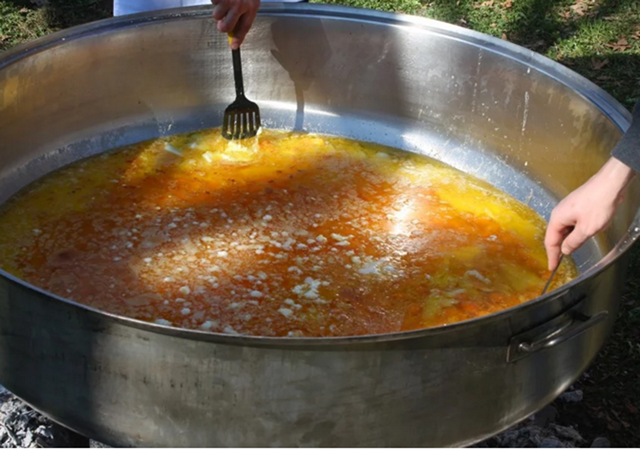 Preparation of scrambled eggs dish by a forty years old recipe marked the first day of Spring on Wednesday in Zenica, a city some 70 kilometres northwest of Bosnia and Herzegovina’s (BiH) capital Sarajevo.

The first day of spring is marked every year on March 21 in Zenica, and the tradition dates back to 1978 when the first “Cimburijada” or “Festival of Scrambled Eggs” was held, an event of preparation of traditional BiH meal made of 1500 eggs.

The tradition says that residents should engage in preparation of dish made of scrambled eggs in the early morning, immediately after the sun comes up.

Rasim Salcinovic, a host, engaged in preparation of the traditional meal by breaking 1500 pieces of eggs, pouring over the traditional butter and putting the “secret” ingredients that are part of the 40 years old traditional recipe.

At the opening ceremony, mayor of Zenica City Fuad Kasumovic broke the egg and sent a message that “Festival of Scrambled Eggs” is a tradition for which the city administration will do everything to keep it happening in future.

Despite the sub-zero temperatures and snow, thousands of residents living in Zenica have enjoyed at the Festival by gathering at the river bank, preparing scrambled eggs and sharing the meal with family and friends.

The celebration continues late into the night with live music, barbecue and traditional bathing in river Bosna.

Residents of Zenica are emotionally attached to the event for four decades believing that the egg is a symbol of the birth, a new life. In this way, they greet the spring, the new life, the revival of nature.