According to all available information, candidate of Serb parties Mladen Grujičić defeated the candidate of pro-Bosniak parties Ćamil Duraković in the election race for the mayor of Srebrenica. One question rightfully arises: which politician from the pro-Bosniak bloc should assume responsibility for the loss of elections in Srebrenica?

Central Election Commission of BiH published the updated results of counted votes, according to which Duraković has 3.897 and Grujičić has 4.675 votes.

Delegate in the House of Representatives of the Parliamentary Assembly of BiH Sadik Ahmetović (SDA) said that the pre-registration of voters has not been conducted well and that the elections were not well-prepared.

“Srebrenica is not a place you win at the day of elections, but in the period of four years a lot more has to be done in terms of bringing more projects and returnees to Srebrenica, increase the number of students who receive scholarship from the state and who will have their ID cards in the municipality, and so on,” said Ahmetović.

Ahmetović believes that this is one of the key omissions that enabled the victory of the candidate of Serb parties for the mayor of Srebrenica. When asked how Grujičić’s victory will affect the life of Bosniaks in Srebrenica, Ahmetović said that Srebrenica is a municipality where a lot has been done over the past ten years regarding the integration of Bosniaks, and reason for that is that Bosniaks had the mayor and the assembly majority.

“In that period, relations between Bosniaks and Serbs in Srebrenica have been brought to an enviable level. That is a town where one such degree of integration was achieved that can be an example to the entire country. I cannot predict how it will be, but I can say that SDA, as the largest Bosniak party in the country, should and must reach the best decisions in order to keep the existing number of people,” said Ahmetović.

Another question is what the guilt of pro-Bosniak parties is in the loss of the mayor office in Srebrenica. Ahmetović claims that the guilt is on the individuals who are holders of political functions in BiH.

“They did not respond to their task and I claim that as someone who was the president of the Municipal Board Srebrenica and vice-president of SDA from Podrinje,” Ahmetović said.

Ahmetović led the three previous election cycles in Srebrenica when, thanks to the engagement of all those involved, Bosniaks managed to win the elections all three times.

“I hope the President of SDA Bakir Izetbegović will call to account those who did not do enough regarding the pre-registration of voters and on providing Srebrenica a special treatment in the past period,” Ahmetović concluded.

Director of the Political Council of the Civil Association and the former coordinator of the Coalition of Non-governmental Organizations Prvi mart Emir Suljagić believes that political responsibility for the loss of Srebrenica should be assumed by SDA.

According to Suljagić, citizens of BiH gave the term to Izetbegović and he should stand before the citizens and admit to the disastrous mistake, instead of throwing dust in peoples’ eyes.

“If I were him, I would assume responsibility, apologized to the citizens and promised that within two to four years I will do everything to take Srebrenica back. It is impermissible to let a man who denies everything that has happened in Srebrenica manage that same town,” said Suljagić. 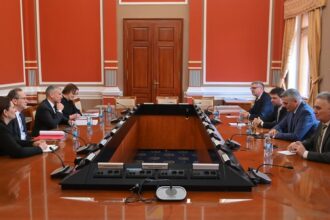